To the wild delight of his owners, Dark Vision turned in a remarkable display at Glorious Goodwood on the last day of July to land the Group 2 Vintage Stakes.

Owned by the 19 members of the Kingsley Park 10 partnership, the Dream Ahead colt produced a scintillating burst of speed in going from last to first to become Mark Johnston’s fourth winner of the race, joining the exalted company of Mister Baileys (1993), Lucky Story (2003) and Shamardal (2004).

The winner of his first two starts at novice level, Dark Vision was taking a huge step up in class at Goodwood. A field of 12 went to post for the Vintage Stakes, worth £113,000 to the winner. The race was established in 1975, originally at Listed level, and was promoted to Group 2 level in 2003. It has been won in the past by Classic winners such as Troy, Dr Devious, Sir Percy and Galileo Gold.

This year’s field included Dunkerron, fourth in the July Stakes, Van Beethoven, winner of the Group 2 Railway Stakes at the Curragh, and the Woodcote Stakes winner, Cosmic Law. Dark Vision was ridden by Silvestre de Sousa, and started the 100/30 favourite.

Dark Vision didn’t make the best of starts, and in the early stages was racing in the last pair and not travelling with any fluency. He continued to race in rear until the field had turned for home. But when he was angled towards the outside of the field by Silvestre de Sousa, the situation changed completely. He gradually began to find his proper stride and finished down the outside of his field like an express train. 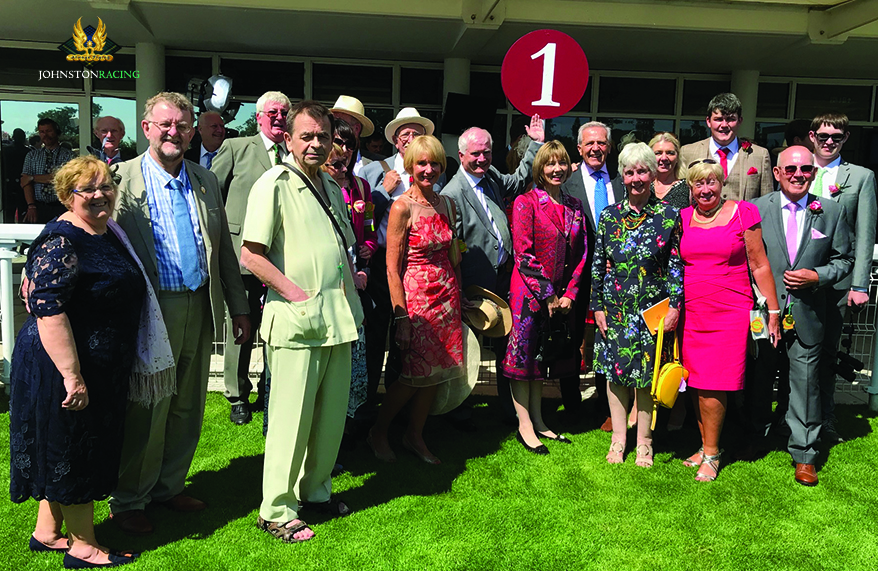 Passing the winning post, he was in front by a length and three-quarters and a length and a quarter from Dunkerron and Confiding respectively. The victory took his total earnings to £128,000. In the immediate aftermath of the race, bookmakers’ quotes for the horse to land next year’s 2,000 Guineas came in as low as 16/1.

This was a tremendous performance visually, and caught by the television cameras shortly after Dark Vision had crossed the line, Charlie Johnston was clearly impressed.

“Dark Vision had to be a very, very good horse and quite lucky to win from where he was,” he told ITV’s Luke Harvey.

“Clearly he is a very, very good horse.”

Mark was equally impressed.
“That was quite incredible,” he told reporters after the race.
“I can hardly believe it myself. I was trying to keep everybody’s feet on the ground today. The partnership had a winner at Ascot on Saturday with a horse that cost 6,000 guineas (Victory Command) and this one cost two and a half times as much at 15,000.
“I never really thought when I set him off at Yarmouth that he’d be coming to a Group 2 race, and when he missed the break here I thought it was all over. I was thinking I’d have to go home and teach this horse to come out of the stalls.
“At that stage, if he’d come fourth I’d have thought I’ve got a really nice horse on my hands. I never thought until a furlong out that we had any chance of winning.”
Asked about what comes next for the strapping Dark Vision, Mark admitted that the plan hasn’t been formulated beyond the Goodwood meeting.
“We had this horse and Victory Command entered in nurseries here this week. I wasn’t sure about sending Victory Command to Ascot but it’s paid off. Clearly it’s been the right decision to bypass the handicaps and go straight to a Group 2!”
For the owners, thrilled with Victory Command’s Listed success at Ascot three days earlier, Dark Vision’s win has provided the icing on the cake. This was the partnership’s eighth winner, and they have now tasted success at Group 2 level with a Dream Ahead colt picked up by Mark for 15,000gns at Book 2 of Tattersalls October Yearling Sale.

The Diktat stallion Dream Ahead was joint champion two-year-old in Europe in 2010 (with Frankel), having won the Prix Morny and the Middle Park Stakes, and Champion Sprinter in Europe in 2011, after July Cup and Betfred Sprint Cup success. Retired in 2012, he has proved popular at stud having produced the likes of Al Wukair, Donjuan Triumphant and Raucous.

At age three and four, Dark Vision’s dam, Black Dahlia, won five races between seven furlongs and a mile and a quarter. She was placed no fewer than 18 times, and finished second in Kempton’s Listed Ladybird Stakes over a mile. She has produced two winners from her two previous foals. Al Hayyah, by Lope de Vega, won a race in France and was three times Listed placed there in 2016; Another Eclipse, also by Lope de Vega, won a three-year-old maiden over 10 furlongs at Brighton in July of last year.

What a tremendous way to round off another fabulous month for Kingsley Park!

Due to the high demand and interest in our partnerships, we are please to announce the launch of Kingsley Park 11 and 12. Find out more on the PARTNERSHIPS page