Mark has trained thousands of winners, capturing most of the biggest prizes in the racing calendar. Here we look back at a few of his truly memorable stars. 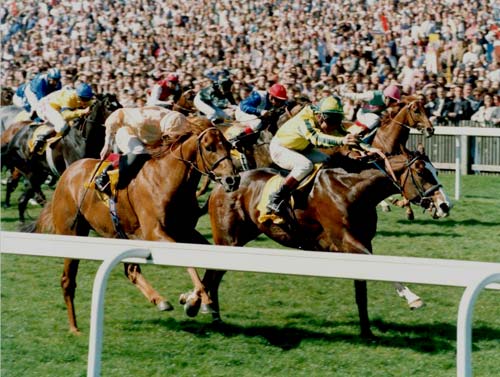 This bay colt by Robellino was the horse which really put Mark Johnston on the map with his scintillating victory in the 2,000 Guineas of 1994 at Newmarket. It was the first Classic winner to come from Middleham since 1945.

Mister Baileys, pictured below in green and yellow silks, won on his debut as a two-year-old, scoring over six furlongs at Newcastle in June 1993. He ran four more times that year, winning twice and rounding off the season with victory in the Royal Lodge Stakes at Ascot.

Mark sent him to Newmarket for the Guineas the following year without a race as a three-year-old, a move which had traditionalists muttering that such unorthodox tactics were doomed. On the big day Mark’s wife Deirdre had to saddle up their Classic hope as Mark had been kicked by a horse, suffering a double break of his wrist.

With Jason Weaver aboard, Mister Baileys was sent off a 16/1 outsider for the mile race. He hit the front with fully three furlongs to go and held on, fighting off all challenges to win by a short-head. After finishing third in the Dante Stakes at York he went to the Epsom Derby, in which he finished fourth behind Erhaab. He later ran fifth in the Sussex Stakes at Goodwood, after which he was retired to stud. Click on video control below to see Mr Baileys winning the 2,000 Guineas. 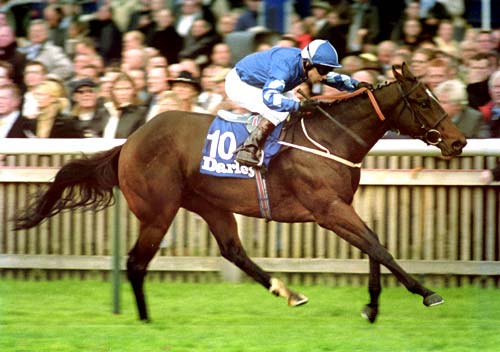 Has been described by Mark as possibly the best horse he ever trained. Foaled in 2002, his sire was the great Giant’s Causeway, the European Horse of the Year in 2000.

Owned by Sheikh Mohammed al Maktoum, the ruler of Dubai, he made his two-year-old debut for Mark in 2004 in a six-furlong maiden at Ayr, running away from the field to win by eight lengths. He then won the Group 2 Vintage Stakes at Goodwood, before heading for the Dewhurst Stakes at Newmarket in October.

He won so easily that, having been undefeated in three races, he was named Europe’s champion two-year-old for that year. Shortly afterwards, as is often the practice with Sheikh Mohammed horses, he was moved to the Maktoum family’s Godolphin operation. He went on to win the French equivalents of the 2,000 Guineas and Derby in 2005 before returning to Britain to take the Group 1 St James’s Palace Stakes, run that year at York.

He was injured while training for the Eclipse and was retired to stud, where he is proving to be a successful stallion, siring Lope De Vega, winner of the 2010 French 2,000 Guineas and French Derby. Click on video control below to see Shamardal winning the Dewhurst Stakes. 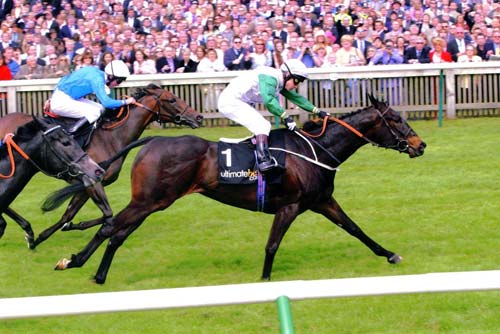 She was a truly remarkable horse. Not just because she won 10 of her 15 races, including two Classics. But she had such poor conformation (bone structure) that her breeder, the Duke of Roxburghe, did not even consider sending her to the sales.

Instead she was sent to Mark in early 2003 to see if he could do anything with the unlikely prospect. By July that year the racing world had the answer – she won all five of her starts, including the Queen Mary Stakes at Royal Ascot.

Shortly after that race the filly went lame and was not seen on a racecourse again until May 2004 when she went to Newmarket for the 1,000 Guineas. She flew out of the stalls under Kevin Darley, made all and gamely stayed on to win by half-a-length. Three weeks later she went to Ireland, for the Irish 1,000 Guineas at the Curragh and repeated the feat.

She won three other Group One races, the Coronation Stakes, the Sun Chariot Stakes and the Matron Stakes at Leopardstown, her final race. To have had such success with a horse with such abnormal legs is rightly regarded as an astonishing training feat.

As Kevin Darley, who partnered Attraction in most of her races, put it: “Mark has the hard job keeping her sound and right at home. My job is easy.” Click on video control below for the story of Attraction, featuring Mark, the Duke of Roxburghe and Kevin Darley. 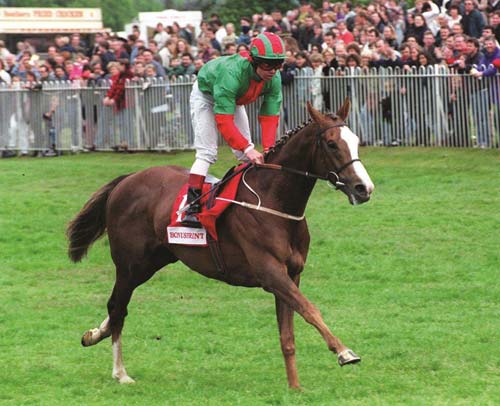 His owner Ron Huggins bought him in Ireland for just 7,200 Irish guineas. The big chestnut with a white blaze failed to impress anybody with his lack of work on the gallops. Mark described him, with impressive understatement, as “not the easiest horse in the world”. But on the track, it was very different.

Double Trigger made his debut in a low-key, nine-furlong maiden at Redcar in September 1993. He romped home ahead of his eight rivals, winning by 10 lengths at the generous odds of 14/1, and for good measure breaking the course record. He went on to win 14 of his 29 starts, capturing all the top stamina titles in a glorious five-year career.

Perhaps his most memorable victory was in the Goodwood Cup of 1995. A couple of years earlier Ron had bought Trigger’s full brother, naming him Double Eclipse and placing him too with Mark. In that remarkable Goodwood race, the brothers slugged it out to the line, with Trigger just holding on to repulse his younger sibling by a neck.

Trigger was retired to stud in 1998, taking with him the affection of a huge section of the racing public. And, for the record, £431,209 in prize-money. Click on video control below to see Double Trigger winning the Ascot Gold Cup.

If you’re interested in becoming an owner at Johnston Racing, or have any further questions, please contact us by following the button or calling us on +44 (0) 1969 622 237.