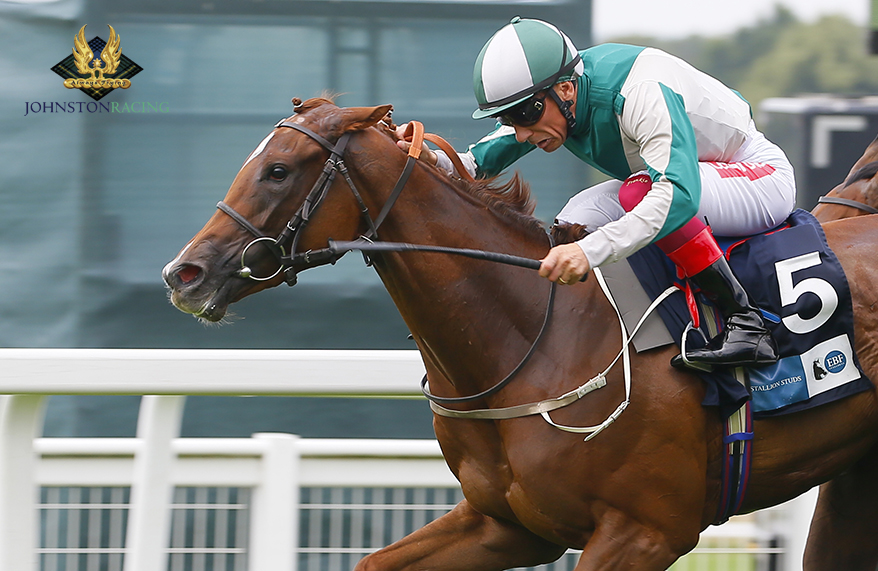 A hat-trick of wins for the juvenile filly Walk In Marrakesh was completed with a fine victory in a Listed race at Sandown.
The chestnut filly, owned by Merriebelle Irish Farm Limited, has made a fantastic start to her racing career, with two wins in July coming on top of a win at Beverley in June which followed a short-head defeat on her debut at Haydock earlier that month.
The Siyouni filly’s first outing last month was in a seven-furlong novice event at Ayr on July 15. She brushed aside four rivals, drawing clear under Joe Fanning in the final quarter of a mile to win, unchallenged, by five lengths from Alix James.
Connections decided that a step into Listed company was justified, and Walk In Marrakesh was declared for the Listed Star Stakes at Sandown on July 25. The yard has had one previous winner of the race in Fireglow, who beat stable companion Dessertoflife in the 2015 renewal of the race.
This year’s Star Stakes saw a field of six go to post for the seven-furlong event. In addition to Walk In Marrakesh, West End Girl represented the stable and owners Alan and Mike Spence. Godolphin’s recent Newmarket winner, Light Blush, was sent off the narrow favourite.
Frankie Dettori was in the saddle on Walk In Marrakesh. The two Johnston-trained runners were drawn on the outer, and both were away quickly from the stalls. This allowed Frankie to bring Walk In Marrakesh over to the inside rail, while Silvestre de Sousa settled West End Girl in second.
Walk In Marrakesh made every yard of the running. Two lengths clear with a quarter of a mile still to race, she was still going strong entering the final furlong. Suddenly, she seemed to begin to run out of fuel and Light Blush closed on her outer, while Romsey closed on the fence. West End Girl, more stoutly bred than the winner, began to close but had nowhere to go as Romsey and Light Blush got closer.
The post came just in time for Walk In Marrakesh, who scored by half a length and a head from Light Blush and the fast-finishing Rhea.
Walk In Marrakesh is out of the Shamardal mare, Walk In Beauty, who was a half-sister to the very useful Zipping (by Zafonic), a top-class juvenile, who finished second in both the Prix Morny and Middle Park Stakes for Robert Collet. Her sire Siyouni, by Pivotal, won the Group 1 Prix Jean-Luc Lagardere as a juvenile and has already sired Group 1 winners in Laurens, Ervedya and Sottsass.
The filly holds an entry in the Group 2 Debutante Stakes at the Curragh on August 23.

Picture: Walk In Marrakesh wins under Frankie Dettori at Sandown