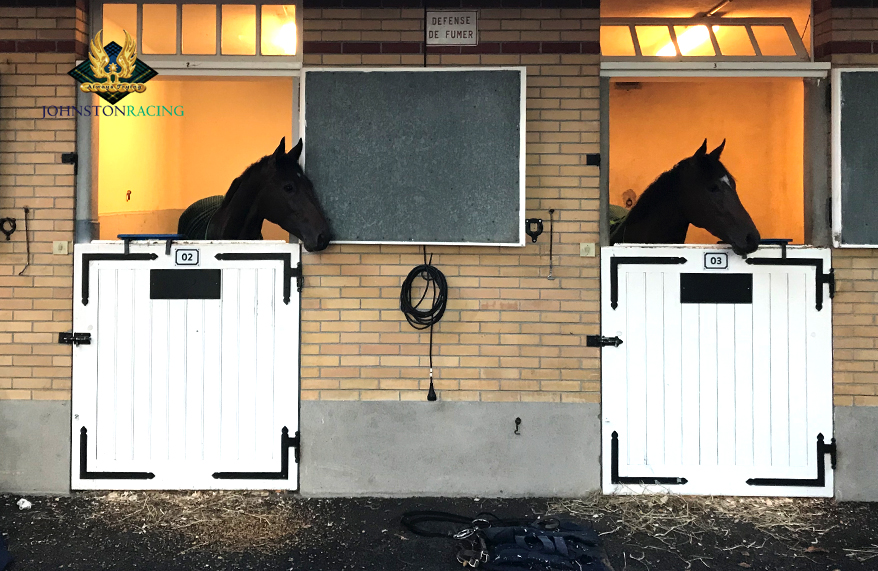 A fantastic weekend in Paris on October 24/October 25 saw the yard land not one Group 1 winner, but two! The unique double for the yard was initiated when juvenile Gear Up produced a wonderfully game performance to land the Criterium de Saint-Cloud, and was completed when the three-year-old Subjectivist led from pillar to post to land the Prix Royal-Oak at Parislongchamp.
The incredible weekend began at Saint-Cloud on the Saturday, when Teme Valley 2’s Gear Up was one of the seven runners who went to post for this year’s renewal of the Criterium de Saint-Cloud.
This was Gear Up’s fourth racecourse start. After a debut success in a seven furlong novice event at York in July, the Teofilo colt returned to the Knavesmire to land the Group 3 Acomb Stakes at the Ebor meeting. He was then sent to Newmarket to contest the Royal Lodge Stakes (Group 2), finishing a close-up fourth of the five runners. On pedigree, he seemed likely to handle the extra two furlongs at Saint-Cloud, but all three of his racecourse runs had been on ‘good’ ground.
Leading into the straight, James kept Gear Up more towards the middle of the track and the others fanned out either side of him to make their challenge.
The first to mount a serious challenge was Tiger Tanaka, brought to challenge by Jessica Marcialis on Gear Up’s inner. Having seen off the filly’s challenge, Gear Up then had to dig deep to hold off Botanik, who launched his challenge on the other side. As they flashed past the winning post, Gear Up had held on to score by a short neck from Andre Fabre’s challenger, with Makaloun just getting up to pip Tiger Tanaka for third, himself a length and three-quarters behind Botanik.
Winning jockey James Doyle explained how the race unfolded for him. ‘It wasn’t necessarily the plan to make the running,’ he explained after the race, ‘but he was very comfortable there and Franny Norton told me that last time in the Royal Lodge they went very slowly and he felt Gear Up was caught for speed.’
‘He was still very green turning for home and tried to hang left all the way up the straight,’ Doyle continued. ‘It was only inside the final furlong that he was finding his best stride. He’s very tough and courageous, a typical Mark Johnston horse, and he stays well.’
All at the yard were delighted when the ‘London bus’ effect kicked in. The following afternoon at Parislongchamp, the Johnston Racing team were delighted to prepare and lead-up their second Group 1 winner of the weekend, when Subjectivist landed the Prix Royal-Oak in grand style.
Joe Fanning took the ride on the Teofilo colt, and set out to make all the running. Joe is renowned as a master of front-running tactics, and this was another of his fantastic rides. Pursued by Holdthasigree, while Princess Zoe and Valia were held up further back in the field, Joe seemed to get a breather into Subjectivist in the false straight.
Turning for home, Joe drove Subjectivist towards the centre of the track, while Pierre-Charles Boudot kept Holdthasigreen on the far rail. Subjectivist, despite a tendency to drift left, kept on well and finished strongly to score by two lengths from Valia, with Holdthasigreen just holding off Princess Zoe for fourth, beaten a further two and a half lengths. Subjectivist can be forgiven for drifting in the straight, as it turned out after the race the blacksmith had to be called to rectify damage to the colt’s off-fore shoe sustained during the race.
This was a first Group 1 success in France for jockey, Joe Fanning. ‘Subjectivist was very brave and we knew he would enjoy the ground’, the delighted rider told the Klarion. ‘He was a little bit keen going to post, but once he got in front he pricked his ears and was fine. I was trying to save a bit in front, but when we got to the straight I was worried he might throw it away by lugging a bit left. He’s a tough stayer, and he’s improving.’
Like Gear Up, Subjectivist was another colt to have been well-bought by Mark, this time for 62,000gns as part of Book 2 of Tattersalls October Yearling Sale in 2018. Out of the Danehill Dancer mare, Reckoning, Subjectivist is, of course, a half-brother to the yard’s St Leger runner-up, Sir Ron Priestley.
It would, of course, be remiss of me not to acknowledge the unique part played in this Group 1 double by the Darley sire, Teofilo, who was responsible for both colts. Retired through injury after an unbeaten juvenile career, in which he listed the National Stakes and the Dewhurst among his wins, the son of Galileo has enjoyed a stellar career with 20 individual Group 1 winners, and among his other progeny to have performed with credit at Kingsley Park are Mildenberger, Fireglow, Austrian School and Monticello, the last two having also raced in Dr Jim Walker’s colours.

Picture: Group 1 winners Subjectivist (left) and Gear Up, ready to head back home to Kingsley Park