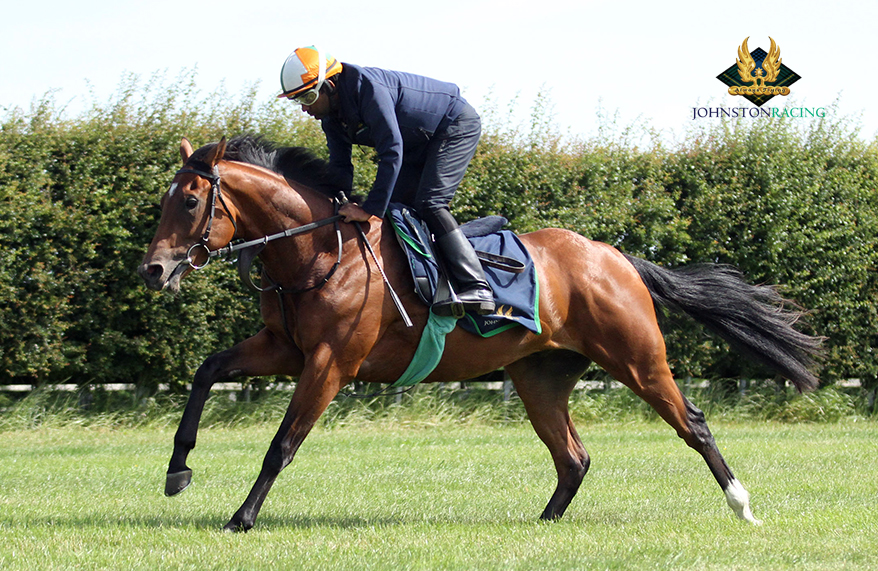 The stable recorded an across-the-card treble on June 28, with wins at Doncaster, Yarmouth and Newcastle.
At Town Moor, Thunderous (pictured under Bhanwar Singh) made a huge impression when making a winning debut in the juvenile novice event over seven furlongs. Nine runners went to post for this Plus 10 race, only two of whom had run previously. Dean Ivory’s Dancinginthewoods had scored at Newmarket on debut and was understandably well supported in the market; even so, Godolphin’s impeccably bred Imperial Empire, a Dubawi colt out of the Street Cry mare, Falls of Lora, was sent off the odds-on favourite.
Thunderous, a Night of Thunder colt owned by Highclere Thoroughbred Racing’s George Stubbs Syndicate, was making his debut with Jason Hart taking the ride. Drawn one from the outside of the field, Thunderous was quickly away from the stalls and set out to make all the running, challenged by Jason Watson on Bad Rabbit.
The previous winner Dancinginthewoods came to challenge Thunderous approaching the furlong marker, but the Night of Thunder colt was driven clear in the final furlong to score by two and a quarter lengths from that rival, with Breathalyze keepin on well for third, albeit three and a quarter lengths in arrears.
Thunderous is out of the Dalakhani mare, Souviens Toi, who despite her name was a Listed winner over ten furlongs in Italy at three; raced in Britain thereafter by Marco Botti, Souviens Toi finished second in the Listed Pontefract Castle Stakes over a mile and a half at four, following home Brown Panther. This colt was picked up for 70,000gns by John and Jake Warren as part of Book 2 of Tattersalls October Yearling Sale last autumn.
At Yarmouth, Oasis Prince showed great resolution in landing an ultra-competitive mile handicap, the feature race on the card, under a first class ride from Jamie Spencer.
David Abell’s Oasis Dream colt started the 2019 campaign in great style, landing a hat-trick of wins at Leicester, Beverley and Haydock. He then didn’t enjoy the clearest of runs in the Silver Bowl at Haydock, and found the heavy ground not to his taste at the same course on June 12.
Sent off the fourth favourite of five at Yarmouth, Oasis Prince found the good to firm conditions much more to his liking. A half-brother to Rare Rhythm and Lyn Valley, Oasis Prince probably has the ability to stay beyond the mile trip he faced here.
Ridden positively by Jamie Spencer, the Oasis Dream colt struck the front two furlongs from home but was soon headed by William Haggas’ Destination. Showing admirable battling qualities, he fought back to seize control of the race in the closing stages and won by a neck from Destination with Wiretap three and a half lengths back in third.
Oasis Prince’s dam, the Singspiel mare Demisemiquaver, stayed ten furlongs well and it may be her son can step up to that distance in the fullness of time. In the meantime, his career earnings of just over £31,500 have almost repaid the 32,000gns Mark paid for him at Book 2 of last year’s Tattersalls October Yearling Sale.
The across-the-card treble was completed at Newcastle when Liliofthelamplight produced a career best performance to land the mile handicap on the Gosforth Cup card.
Successful at Wolverhampton in April on her second start, Garrett Freyne’s Helmet filly faced ten rivals at Gosforth Park and was allowed to start at odds of 25/1. PJ McDonald took the ride.
Always prominent, the Helmet filly was noted making good headway in the penultimate furlong, and, when she struck the front in the closing stages, she held on well to score by a neck and half a length from Paparazzi and Elamirr in a driving finish.
Out of the Dr Fong mare, Lilakiya, who won a Wolverhampton maiden over a mile and a half as a three-year-old, Liliofthelamplight has now won two of her five career starts and may well have the ability to step up in trip, if required.
The across-the-card treble could have been better still; the yard’s eight runners on the day returned form figures of 11216222!