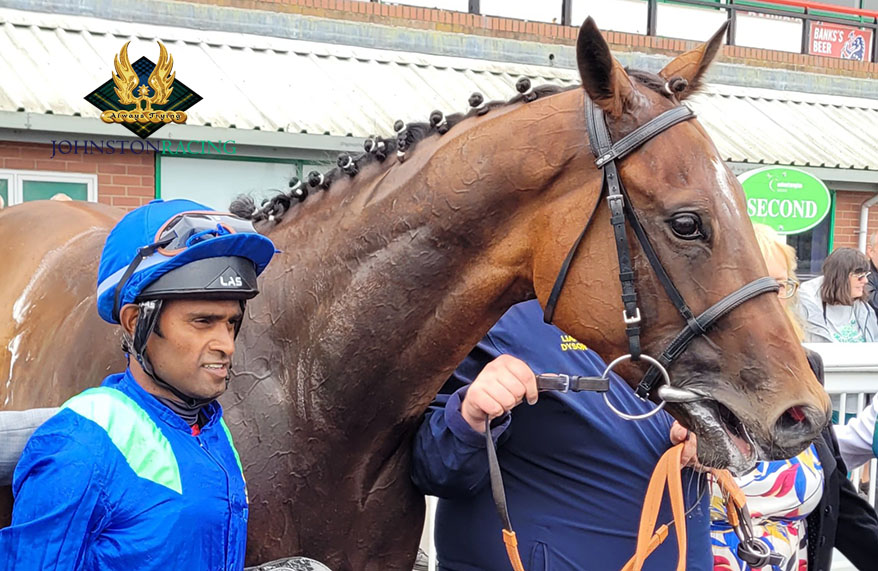 Two days after Jilly Cooper’s success Kingsley Park 27 – Ready To Run partners had more reasons to smile as Gangway struck in a Wolverhampton handicap for that man, Neeraj Rawal (pictured above in the winner’s enclosure with Gangway).

The Gleneagles gelding, a course and distance winner at Dunstall Park earlier in the year, had run well in defeat on her last two starts, and faced nine rivals in this handicap over nine and a half furlongs. Gangway was one of just two three-year-olds in the race.

After disputing the lead with Carey Street in the very early stages, Gangway, who took a keen hold, was settled on the rail by Neeraj Rawal. Always in a prominent position, Gangway was kept on the inner as Carey Street swung a little wide into the straight.

Sent through the gap by Neeraj, Gangway kept on really strongly to score by a length from Carey Street, with Tashkeer half a length back in third. ‘I was in a nice position early on,’ Neeraj told the Klarion. ‘I got a lovely split on the inside, and had to go for it.’

It’s interesting to note that Gangway is out of the Listed-placed Dylan Thomas mare, An Saincheann. The winner of one of her five career starts, and placed in three of the others, An Saincheann also won over nine and a half furlongs – although at Gowran Park rather than Wolverhampton! Gangway is a half-brother to Astonished (Sea The Stars), whose two career wins were chalked up on the all-weather.