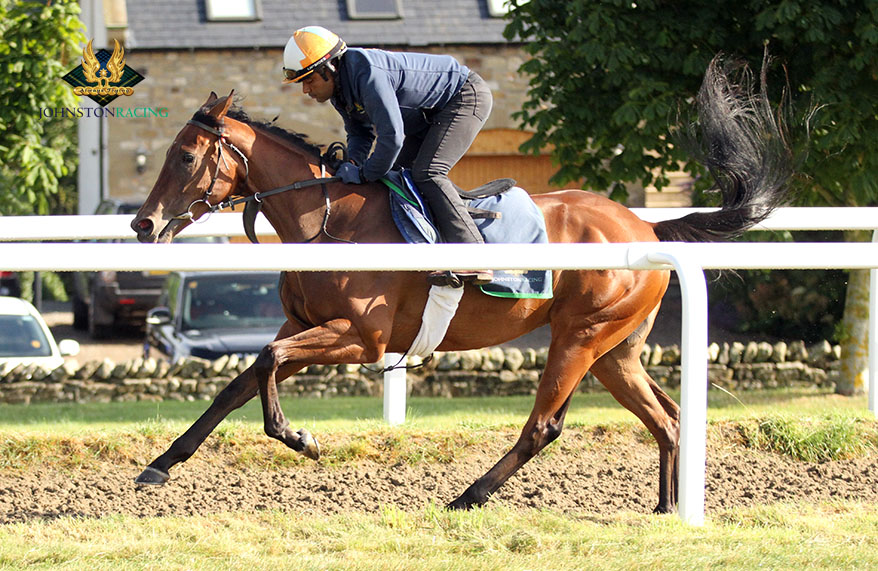 Thanks to the sporting media’s love for buzzwords, the phrase ‘Super Saturday’ is often overused these days, but in truth it’s hard not to think of the expression when describing the yard’s achievements on August 6. Four winners were chalked up on the day, courtesy of splendid performances from Killybegs Warrior, Madame Ambassador, Themaxwecan and Lakota Sioux, while Dutch Decoy was close to a fifth win with a spirited run at Haydock!

For this year’s renewal of the Group 3 Sweet Solera Stakes, Mark and Charlie entered Gallop Racing’s Lakota Sioux (pictured above). The Sioux Nation filly, a £15,000 purchase at last year’s Tattersalls Ireland September Yearling Sale, had won a seven furlong novice event at Lingfield at the end of May in great style, before staying on from the rear to run third in Royal Ascot’s Chesham Stakes last time out. James Doyle, successful earlier in the afternoon on the yard’s Killybegs Warrior, took the ride.
A field of nine went to post for the race, with Karl Burke’s Novakai sent off the favourite. Alseyoob made the early running in the centre of the track, with Lakota Sioux racing prominently on her outer. Nearer the stands’ side rail, Dandy Alys led the favourite Novakai in a separate group of two.
Flashing her tail repeatedly, Lakota Sioux travelled strongly but it was Dandy Alys who made the first move, striking the front with just over two furlongs to race. Asked to respond by James Doyle, Lakota Sioux edged to her right but took the lead entering the final furlong. She then betrayed her greenness, wandering under pressure and flashing that tail, but kept on strongly on the rising ground to score by three-quarters of a length from Dandy Alys, with Mottisfont half a length back in third.
It was an important win for the filly’s sire, too, as this was a second black-type success for Sioux Nation, a son of Scat Daddy whose best moment on the track came when he won the Group 1 Phoenix Stakes at The Curragh in 2017.
Charlie Johnston was delighted to see a plan come to fruition. ‘This has been the plan since Lakota Sioux finished third in the Chesham at Royal Ascot,’ Charlie told the Klarion. ‘It’s great for the owners that it’s come off. We came here as we had to keep Lakota Sioux and our other filly (Dance in the Grass) apart.’
‘Every time I see her in the paddock I think how the hell did I buy her for £15,000 as she is a gorgeous filly,’ Charlie continued. ‘She was difficult to break early on, and I remember it vividly as she was one of our worst problem children in the winter. The tail swishing has been a theme since day one, but you can’t question her attitude there as she toughed it out well.’
Lakota Sioux is the seventh of eight foals out of the Dalakhani mare, Shemiyla, who won the Group 3 Prix Allez France over ten furlongs at Chantilly as a three-year-old for HH The Aga Khan. That makes Lakota Sioux a half-sister to Sheraz (by Sea The Stars), a Listed winner in France who has gone on to finish second in the Sydney Cup, a Group 1 Handicap at Randwick, earning a cool £200,000 for that race alone.

At Ascot, he stable supported the Shergar Cup meeting by sending six horses to contest the Cup races, and it turned out to be the stayers who caught the eye. The Shergar Cup Stayers’ race featured a field of 10 runners, set to race over a two-mile trip. The runners were rated from 99 to 86, and, not surprisingly, it proved a highly competitive event.
Dougie Livingston’s Themaxwecan was ridden by Jamie Spencer, representing the British and Irish team, while Sheikh Hamdan bin Mohammed’s Golden Flame was ridden by the New Zealand-born Australia-based jockey Jason Collett for the Rest of the World Team.
The Goodwood Handicap second, Super Superjack, a winner over course and distance in May, headed the market and was ridden by Nicola Currie, of the Girls team, who won the Alistair Haggis Silver Saddle award as Leading Rider at the meeting in 2021.
Jason Collett sent Golden Flame into the lead from the outset, while Jamie Spencer had Themaxwecan settled in fourth. The order remained remarkably little changed until, turning into the straight Jason Collett on Golden Flame kicked for home. The Golden Horn colt looked like holding off allcomers, but Jamie brought Themaxwecan with a determined challenge to lead with just under a furlong to race, and in the dying strides Going Gone just deprived Golden Flame of second.
At the post, Themaxwecan had won by half a length from Going Gone, with Golden Flame a head away in third.
Winning jockey Jamie was thrilled to have won on the horse for owner Dougie Livingston.
‘I’m good friends with Dougie and I had to wait for the Shergar Cup draw for me to get a ride for him,’ he told the Klarion.
‘Themaxwecan has been a good servant and it’s just nice to get on the horse. He was very brave in the last furlong.’
Owner Dougie was equally delighted.
‘It is a fantastic day,’ he said.
‘We have had Themaxwecan since he was a yearling. He has his quirks, but he knows his way around here and Jamie said that. He’s just a pleasure to own.’
Mark was on hand to welcome home the winner.
‘Themaxwecan can be difficult and Jamie hasn’t ridden him before,’ he explained.
‘But Jamie said he had spoken to James Doyle, and James had said you’d know as soon as you were on him if he was in the mood for it. He knew, turning for home, that the horse would run a big race.’
The win brought Themaxwecan’s career tally of successes to seven. On this form, the six-year-old is more than capable of adding to his winning record.

Mick Doyle’s Killybegs Warrior won well on debut at Newmarket in June, and wasn’t disgraced when conceding weight to some useful sorts at Haydock next time out. Back at Newmarket for his handicap debut, the Saxon Warrior colt faced two well-bred rivals over seven furlongs, and was ridden for the first time by James Doyle.
Leading from the outset as the trio raced in Indian file in the early stages, Killybegs Warrior was always in command. Shaken up with two furlongs to race, the colt drifted right onto the stands’ rail, but forged clear on the rising ground to the finish to score by four lengths from Tarlo with Kodi Dancer a length and three-quarters back in third.
Charlie Johnston was delighted by Killybegs Warrior’s performance. ‘He’s still green,’ Charlie told the Klarion after the race, ‘and he’ll relish going further in time. He’s in the Goffs Million next month (7f, The Curragh) and that will be his main target for the rest of the season.
Killybegs Warrior is out of the Namid mare, Alltherightmoves, and is thus a half-brother to the Listed-placed Ventura Knight, whom Mark trained to win seven races for Middleham Park Racing in 2017/18. He remains an exciting prospect for next year.

Bouncing back from a below par performance at Pontefract at the beginning of July, Kirsten Rausing’s Madame Ambassador ran well to land the three-year-old handicap over a mile and a half, the next race on the Newmarket card.
The Churchill filly faced just three rivals, and was ridden by Richard Kingscote for the first time on this, her 12th career start.
Mashkuur set out to make all the running, with Madame Ambassador racing in a clear second, from Dark Mystery and the favourite, Fearless Bay. The placings remained largely unaltered until three furlongs out, after which Mashkuur was sending out distress signals as Fearless Bay and Dark Mystery took closer order.
Staying on well on the outer of Dark Mystery, Madame Ambassador finished strongly on the rising ground to score by a neck from Dark Mystery, the pair having pulled two and a half lengths clear of Mashkuur.
Charlie Johnston felt the filly had put her previous disappointing display behind her here. ‘I couldn’t tell you why she ran like she did at Pontefract last time out,’ he told the Klarion, ‘but it was a real blot on her copybook. You can’t say anything negative about her attitude when she has toughed it out like that today. Richard always felt she was going to win, and she deserved that.’
This was a second career success for Madame Ambassador, who is beautifully named, being by Churchill out of Ms Rausing’s Group 1 winning filly, Lady Jane Digby. She is the seventh winner out of the dam, including Galapiat and Francophilia, all of whom have been trained at Kingsley House.