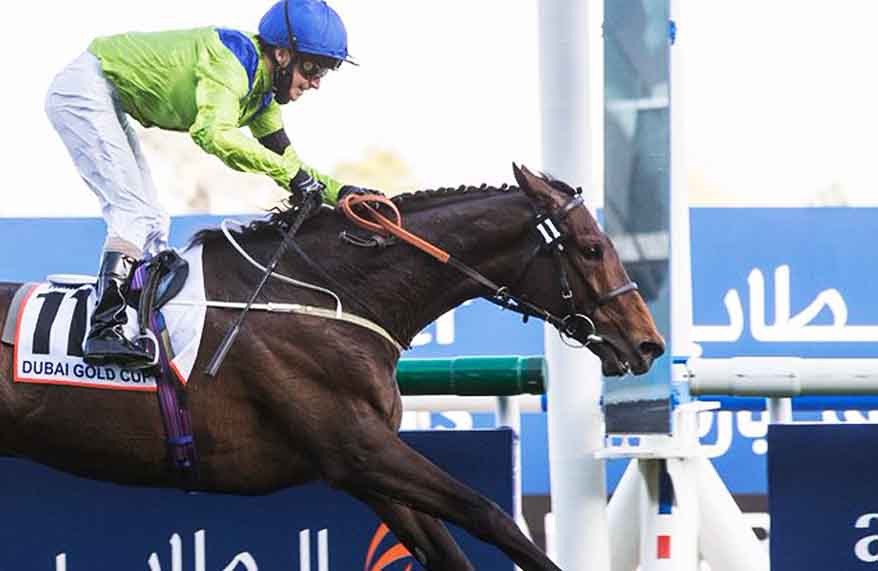 Dr Jim Walker’s Subjectivist, a Group 1 winner for the yard last year in the Prix Royal-Oak at Parislongchamp in October, made a return to the racecourse at Meydan on March 27 in the Dubai Gold Cup, and produced a record-breaking display to crush his rivals by almost six lengths.
The son of Teofilo, now a four-year-old, travelled to Dubai in search of his third Group win, having landed the Group 3 March Stakes at Goodwood before his triumph in the Bois de Boulogne. He was one of 11 runners in the Dubai Gold Cup, a Group 2 event run over two miles of Meydan’s impressive turf track. Regular pilot Joe Fanning was in the saddle, and was making his own riding debut at Meydan.
Despite his Group 1 credentials, Subjectivist, the youngest horse in the race, was relatively ignored in the betting, preference being for Godolphin’s Secret Advisor, who boasted a 100% record on the track, and Spanish Mission, last year’s Doncaster Cup winner.
As they broke from the stalls, Mikael Barzalona had For The Top away smartly and the former Argentinian Group 1 winner made the running. Having been drawn wider out, Joe was happy to settle Subjectivist on the outer of the leader, with the Teofilo colt travelling sweetly in second.
In the backstraight, Volcanic Sky travelled in third, partnered by Christophe Soumillon. Nearing the end of the backstraight, Joe eased Subjectivist past For The Top and into the lead. While negotiating the bend, he stole a couple of lengths on the field to the extent that, straightening up for home, Subjectivist was four lengths clear in front.
Keeping on well against the rail, Subjectivist never looked like being caught and at the line, he had increased his lead to five and three-quarter lengths over the German challenger, Walderbe, with Away He Goes a head back in third. It was interesting to note that For The Top and Volcanic Sky, the only other horses to travel up with the pace, finished second last and last respectively.
Once again, Joe Fanning showed that he has few equals when it comes to judging the pace of a race, and Subjectivist, in covering the two mile course in 3m 17.17s, had broken the existing track record of 3m 17.92s, set by Vazirabad in 2018.
Joe Fanning was thrilled with the win and paid tribute to Subjectivist after the race. ‘He’s a good horse,’ he confirmed to the Meydan press corps. ‘He’s sometimes keen, but he settled very well today and galloped all the way to the line. He’s just brilliant.’
Mark Johnston was puzzled why the horse wasn’t being discussed as a likely winner of the race. ‘I kept looking at the form and he wasn’t being mentioned before the race which made no sense,’ he remarked. ‘He’s a Group 1 winner last time out and he had all the credentials for this task.’
For Mark, the race couldn’t have gone any better. ‘The whole way through the race I was very happy and I thought we were going best,’ he insisted. ‘When he hit the front it was clear to me that the other horses had a lot of ground to make up. It wasn’t as if he’d been running too free, or he’d been driven to the front. He eased to the front with five lengths to spare over the field.’
As well as swelling the horse’s earnings (the race was worth a cool £325,000 to the winner), Subjectivist laid down a marker here as to his likely involvement in many of the top stayers’ races in the season ahead. Indeed, he earned a quote for the Ascot Gold Cup of 8/1.
The win also provided another feather in the cap of Subjectivist’s dam, the Danehill Dancer mare, Reckoning, reminding us all how exciting it is to have four generations of her progeny in training at Kingsley Park at the same time, with Sir Ron Priestley, Subjectivist and Alba Rose being joined this year by her juvenile filly by Ulysses.
Nominating the Gold Cup and the Goodwood Cup as obvious targets for Subjectivist, Mark told journalists at Meydan that ‘We love the Cup division.’ Expanding on his theme, he explained that ‘with Double Trigger and then Royal Rebel, we were always right up there with some of the best horses in the staying division. We’ve had a few relatively quiet years, but I just feel we are going into this year’s Cup races with the best team in the world.’
Strong words, but after a performance like this and with Nayef Road waiting in the wings, it could be a season to remember!