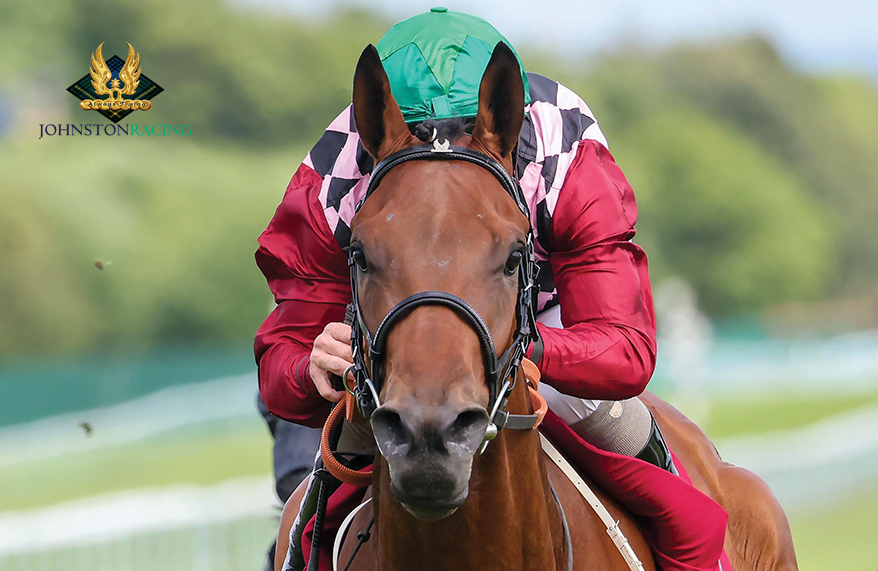 Soapy Stevens (pictured above) followed up his June win at Chester with a last gasp success at Newmarket on July 8.

Jim Duggan and Scott Brown’s Harzand gelding, now a four-year-old, was raised 5lb in the handicap for that  Chester success. At Newmarket, he was stepping back down in trip to a mile and three-quarters in a heritage handicap won by the stable in recent years with Cape Coast and Kings Advice.

A field of 16 went to post for the race, with the Duke of Edinburgh Stakes winner Candleford sent off as favourite. Franny Norton took the ride on Soapy Stevens and sent the gelding into a prominent position from the outset.

As Mandoob made the running, Soapy Stevens disputed third, racing on the inner. Travelling strongly as the race began to develop in the final two furlongs, Soapy Stevens had to wait for a gap to open before mounting his challenge. Switched left by Franny, the gelding powered home in the closing stages to hit the front in the shadow of the post, pipping Red Flyer and Zoffee by two short heads.

Winning jockey Franny Norton wasn’t certain that Soapy Stevens had got there in time. ‘I didn’t know, and usually I do, but I just put my head down and I might still have been pushing up to the road,’ admitted the popular Liverpudlian. ‘Soapy Stevens has been a little unlucky in some of his races. I followed Frankie through (on Zoffee) and I thought he’d nailed it, by my horse just found the extra length I wanted.’

This was a valuable success for the gelding, with a first prize in excess of £50,000. Travelling strongly throughout, Soapy Stevens looks sure to be suited by a step up in trip once more and remains progressive.

An across-the-card double on the day was completed when True Statesman carried top weight to success in a Chester nursery.

True Statesman, a Churchill colt owned in partnership by Jane Newett and Dougie Livingston, won at Chelmsford in June and raced off a mark of 83 at Chester. He was also making his handicap debut and stepping up to seven furlongs for the first time. Jason Hart took the ride.

Betweenthesticks made the running, with True Statesman racing in second for most of the way. At the top of the straight, Jason sent the colt into the lead, and he quickly pulled a couple of lengths clear of his field. Keeping on strongly through the final furlong, True Statesman was eased close home but still registered a three length win over Double O, with Zephina the same distance back in third.