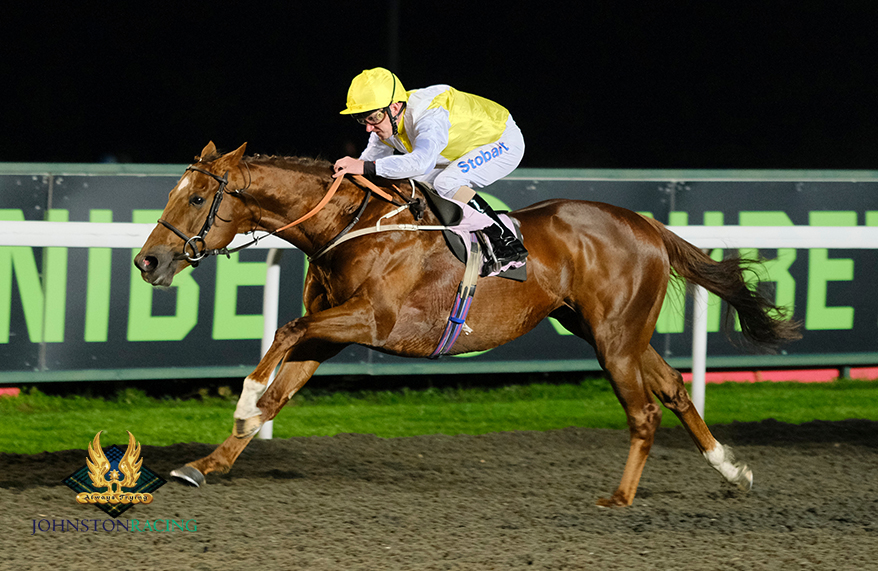 The valuable stayers’ handicap at Ripon on April 27 saw several of the field from the Queen’s Cup at Musselburgh a week earlier meet again. Johnston representatives Making Miracles (pictured) and Lucky Deal were joined by Eye of the Storm, Tor and Mirsaale, with Yabass and Northwest Frontier completing the field. Crucially, the Ripon race was over an additional two furlongs at two miles. Both Johnston runners had been doing their best work in the closing stages at Musselburgh, so hopes were high that they would be suited by the additional test of stamina. Yabass set out to make the running, pursued by Making Miracles with Joe Fanning aboard. The front pair disputed the lead throughout, and when the field turned for home, Andrew Breslin brought Lucky Deal wide to launch a challenge from the rear. Making Miracles eventually wore down Yabass, taking the lead inside the final furlong. The four-year-old Pivotal gelding kept on well to score by a
length from Lucky Deal and take the £15,500 prize. This was a third career success for Making Miracles, owned by Acorn, Brown, Parker and Scott, who may now be aimed at the Chester Cup.
Five wins on the trot since joining Johnston Racing, with an April hattrick in the space of three weeks — that’s the regal record of King’s Advice!
A son of the mighty Frankel, the five-year-old owned by Saeed Jaber moved to Kingsley Park from Germany earlier this year. He won on his first outing for the yard at Lingfield in March and made it five  successive victories when scoring at Ripon on April 27, a Class 2 handicap over 12 furlongs worth nearly £16,000 to the winner.
He has displayed remarkable versatility as he has now won on three different synthetic surfaces and on turf. He won over nine and 10 furlongs in Germany, while in Britain four of his five wins have been over a mile and a half, with the other being over two furlongs further. Joe Great Advice!
King’s Advice under Joe Fanning Fanning has been in the saddle for all five British victories, which have seen the horse’s rating rise from 71 to 95. At Ripon, King’s Advice lined up against five rivals, including Frankuus, another Frankel progeny, for the one and a half mile race. The early pace was made by former Kingsley Park inmate Frankuus, while Joe was happy to track the leaders.
Joe began to ask King’s Advice to close on the leaders and he responded well, staying on strongly to collar Frankuus in the closing stages and winning by a length.