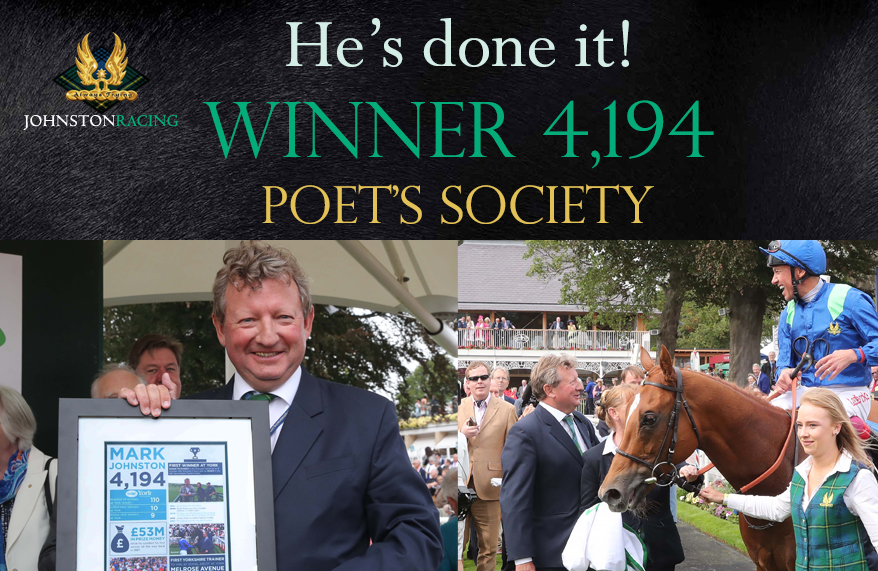 After a fabulous run from Kingsley Park 9’s Poet’s Society, and an equally fabulous ride from an inspired Frankie Dettori, Mark Johnston became the winningmost trainer in the history of the British turf at York on August 23. The victory of Poet’s Society gave him his 4,194th winner, allowing him to ease past the previous best total achieved by Richard Hannon, Senior.

Sent off at odds of 20/1 in the Clipper Logistics Handicap over a mile of the Knavesmire track, Poet’s Society won a battle with at least four other horses just to make the running in an ultra-competitive event. Turning for home still at the head of affairs, Poet’s Society was travelling well for Frankie, as potential challengers started to move closer to the lead.

In particular, joint favourite Sharja Bridge was noted making smooth progress on the inner with three furlongs to run, and there’s little doubt that, at one stage, the Oasis Dream colt headed Poet’s Society. But this was a day when Poet’s Society was not going to be beaten. Tenaciously, he put his head down and answered Dettori’s driving with a fantastically game performance.

Inside the final furlong, Poet’s Society got the better of Sharja Bridge, only for Kynren and Firmament to emerge as serious contenders. Bravely, the Poet’s Voice gelding kept on well, and as he passed the post in front, Frankie waved his whip in acknowledgement not just of Mark’s achievement, but of a fantastic effort by his willing partner.

“I rode him at Goodwood and he was very tenacious, and he liked to fight,” Frankie told Lydia Hislop after the race. “I made the running here and I knew he would find plenty if someone came to us. He’s just a remarkable little horse.”

Acknowledging Mark’s record, Frankie had an unusual view of what his role in making history would mean. “It’s just remarkable what Mark has achieved these last few years – the consistency of training 200 winners year in, year out,” he continued. “He’s a very nice fella to ride for, and because of this winner my picture is going to be in the downstairs loo forever in the Johnston household!”

Mark received many congratulations in the aftermath of the race, and received a memento from York Racecourse to celebrate the fact that history had been made on the Knavesmire. Caught by Matt Chapman for the inevitable moment of reaction, his first response was absolutely typical of the man. “It’s just a relief, really.”

Mark was cheered into the winners’ enclosure for the presentation and was clearly touched by the welcome he received. Again, Frankie had the last word when he said: “Mark is usually very reserved, but he looked very cheerful at the celebrations and quite emotional, actually. It was nice to see.”