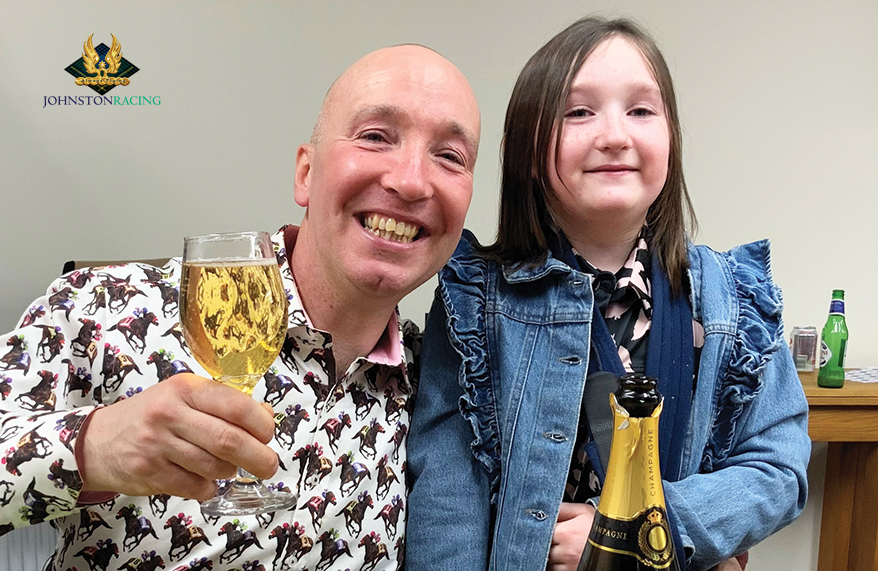 Stable stalwart Paddy Trainor was rewarded for years of dedicated service when named Employee of the Year, the top prize at the Godolphin Stud and Stable Staff Awards for 2022.

He was the winner of his own category, Rider/Groom, which meant he was then up against the winners of three other categories for the prestigious, and valuable, title of the year’s best employee at the virtual awards ceremony held on February 21 and shown on Racing TV.

And he was overjoyed as it was announced he had won the top prize. It meant Paddy, who with wife Sam is in the process of buying their first home, won £5,000 for the category award and £10,000 for being Employee of the Year.

On top of that, a matching £15,000 goes to the yard to be shared among his colleagues. And there was further success for Johnston Racing, with John ‘Spider’ Nicholson named as a runner-up in the Rider/Groom category, winning £2,000 for himself and £2,000 for his colleagues.

Two other staff members, Mark Billingham and Harvey Ewart had earlier made the shortlists of 10 for their respective categories; Mark for Leadership and Harvey for Dedication. It was the second time the yard had won the Employee of the Year award, for Assistant Trainer Jock Bennett took the title in 2013.

Paddy, 40, told the Klarion: ‘Winning the awards was a dream come true. It means the world to me and my family and everyone at Johnston Racing. I’d like to thank Mark, Charlie and the whole team for their support and, obviously the judges and everyone connected with the awards, too.’

‘Racing is my life and I love helping people, whether at the races or at home. As a young lad I had learning difficulties at school, but what helped me was being around ponies and horses. It sounds silly to some, but it’s true, it helped a lot with my dyslexia.

‘So I always thought if I was going to do anything when I was older it would be with horses. I have dyslexia, so I want people to know you can still achieve qualifications and carve out a great life for yourself working in the horse racing industry.

‘I want people with learning difficulties to come out of the darkness into the light and go for it, because I’ve proved you can do it.’

Paddy, who grew up in Glasgow, and Sam have a daughter, Shannon, whom Paddy describes as ‘eight, going on eighteen!’ After leaving school he spent a short time in the army before going to the British Racing School. He then went to Jonjo O’Neill’s yard for a few months before joining Mark Johnston more than 23 years ago.

Sam is a former Johnston Racing employee who is now regional training co-ordinator at the National Horseracing College in Doncaster, where Paddy qualified as a Level Two industry coach.

‘I didn’t think I’d have the confidence to be a coach,’ he said.

‘A lot of people say I love chatting, but I talk a lot to cover my nerves. Sam encouraged me to take the course and now I love teaching people.’

Regular racegoers will recognise Paddy, who is known for his passion and enthusiasm on the racecourse and his ‘larger-than-life’ personality which has left an indelible mark on Johnston Racing. In November he was honoured at the Northern Racing Awards, receiving an ‘Our People Award’ in recognition of his contribution to racing in the north over many years.

The runner-up spot in the Godolphins for ‘Spider’ Nicholson was also well-deserved recognition for the hard-working employee. His contribution to the Johnston Racing team is invaluable, and he is renowned for putting heart and soul into the routine of night-feeding and making preparations during the night for the morning’s work ahead. His outstanding dedication to the task is clear for all to see.

The awards, which carried total prize-money of £128,500, consist of six categories: the David Nicholson Newcomer Award, the Leadership Award, the Rider/Groom Award, the Stud Staff Award, the Dedication Award and the Community Award. Excluding the first and last-named categories, the Employee of the Year is chosen from the winners of the other four categories

The category winners who faced off against Paddy for the main prize of the night were a formidable bunch. Dulcie West of North Farm Stud was a deserving winner of the Stud Staff Award; Tom Messenger of Dan Skelton Racing was a popular winner of the Leadership Award, while Alyson West of James Ferguson Racing landed the Dedication Award thanks to her considerable experience and reputation within the industry.

Nick Luck, chairman of the judging panel for the awards, paid a glowing tribute to Paddy at the ceremony, hosted by Oli Bell.

‘Paddy is an incredibly deserving winner of the Employee of the Year Award and all of his colleagues at Johnston Racing will rightly feel very proud this evening,’ said the broadcaster.

Reacting to a piece on Paddy’s success in the Racing Post, the County Kildare-based racing journalist and writer Lissa Oliver summed it up perfectly when, posting on social media, she observed: ‘Everyone who goes racing knows him and is cheered by the warmth he radiates.’ Well done, Paddy!

Thanks are rightly due to Godolphin for their continued and generous sponsorship of the awards, to the BHA for organising them, and to the Racing Post and Racing TV for publicising and covering the event.