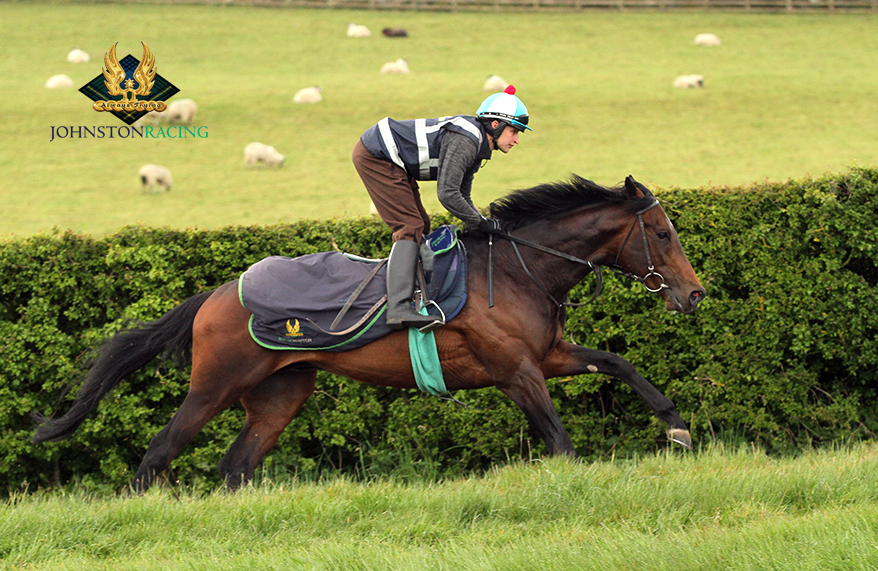 Following on the stable’s tremendous start to the May campaign, another across-the-card double was notched up on May 2. Firstly, Jaber Abdullah’s Zabeel Champion completed a hat-trick by adding a valuable Newmarket handicap over a mile and a half to his brace of wins at Ripon in April. The Poet’s Voice colt just prevailed in a driving finish with favourite Global Storm, Ben Curtis’ mount getting the verdict by a nose.
The double was completed at Hamilton Park, where Ali Saeed’s The Trader landed the Buttonhook Handicap over a mile and five furlongs. The five-year-old Mastercraftsman gelding was given a fine ride by Andrew Breslin and defied stablemate Hochfeld by a neck.
At Beverley on May 3, the previously unraced Military Two Step made a successful racecourse debut in a ten furlong novice event for three-year-olds.
Partnered by Ben Curtis, the Jukebox Jury filly, owned and trained by Johnston Racing, defeated the favourite, Haija, by two and a quarter lengths.
Ali Abdulla Saeed’s Showcasing filly, Ellade, became Johnston Racing’s third juvenile winner of the year when landing a Lingfield novice event on May 4. Despite being headed two furlongs out, Franny Norton’s mount rallied on debut to win by a neck from Gift Horse.
Johnston Racing secured another across-the-card double on May 6, with winners at Chester and Chelmsford. The three-year-old Love Is Golden made a successful seasonal debut on The Roodee in a competitive handicap. Stepping up to an extended mile and a half for the first time, Crone Stud Farm’s Golden Horn colt made virtually all the running under Franny Norton to defy stablemate Baileys Derbyday by a neck. The double was completed later in the afternoon when Saeed Suhail’s Red Mirage maintained his unbeaten record with a pillar-to-post success at Chelmsford City. The Showcasing colt, bred by Kingsley Park Limited, travelled well throughout for jockey Ben Curtis and kept on well to hold off Godolphin’s Tomouh by a neck.
The yard continued in double form on May 11, with Khezaana’s Beverley success being followed up with another impressive run from Dream With Me at Ayr. Shadwell Estate Company’s Khezaana landed her first win at Beverley in a ten furlong handicap. One of seven runners, the Muhaarar filly took the lead under Dane O’Neill with just over a furlong to run, and the three-year-old kept on well to score by two and three-quarter lengths from Space Kid.
At Ayr, Saeed Suhail’s Dream With Me was attempting to follow up his recent win over course and distance. Ridden by Joe Fanning, the four-year-old Frankel colt faced seven rivals in the ten furlong handicap. Daafr made the early running, with Dream With Me tracking the gelding in a clear second. Travelling strongly under Joe, Dream With Me was sent into the lead two furlongs out, and when shaken up he readily came clear of his rivals to score by two and a half length from Anythingtoday. This was Dream With Me’s third success of the year.
The final race of York’s Dante Festival, on May 14, fell to Johnston Racing, when Kondo Isami turned in a very useful performance, on this his seasonal debut and first run on turf. Racing in midfield under Ben Curtis in a mile and a half handicap for three-year-olds, the Galileo colt, owned by Toshihiro Matsumoto and Partners, took up the running two furlongs out and kept on gamely to land the spoils from Tashkan by a short head.
This was a decent effort from Kondo Isami who was conceding weight to all bar one of his nine rivals. He is a full-brother to the recent Listed winner, Empire of the Sun, and can progress from this win.
After a frustrating, winnerless run during which the stable sent out 10 horses to finish second, Glen Again (pictured) scored for the yard at Nottingham on May 22, when carrying top weight in a handicap over a mile and a quarter on rain-soaked ground. Teme Valley’s Gleneagles colt was ridden by Ben Curtis and produced a game performance, just getting up on the post to deny Forever Forward by a nose. Hampered by the runner-up inside the final furlong, Glen Again did well to score here and looks ready to step up in trip once more.