Listed win for Dance In The Grass 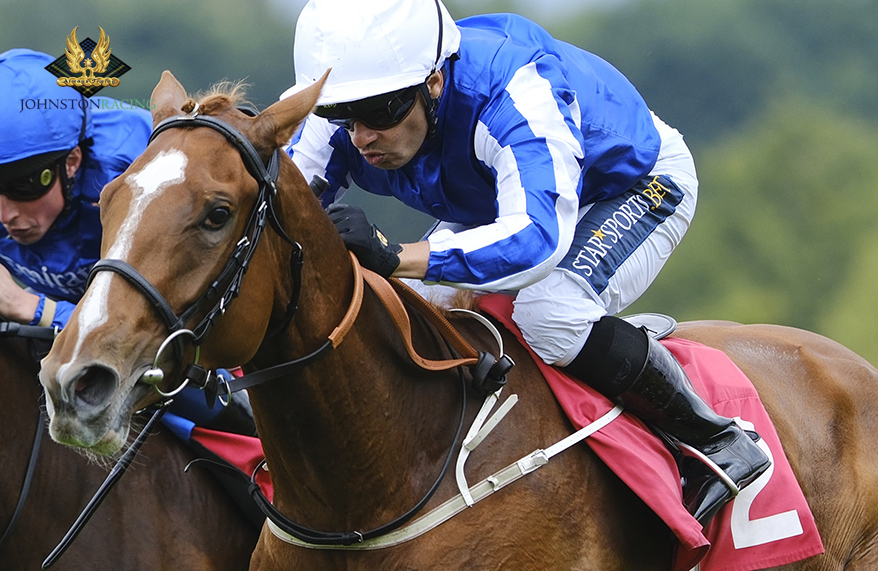 Dance In The Grass (pictured above) successfully took a huge step up in class when winning the Listed Star Stakes at Sandown on July 21.

Originally known as the Milcars Fillies’ Stakes, the Star Stakes was given its current name and promoted to Listed status in 1994. The race is open to juvenile fillies and is run over seven furlongs. Last year’s renewal was won by Inspiral, who went on to be named Champion Juvenile Filly at the Cartier Racing Awards. Mark Johnston had previously trained two winners of the race in Sheikh Hamdan bin Mohammed’s Fireglow (2015) and Merriebelle Stables’ Walk in Marrakesh (2019).

A Cracksman filly owned by Jaber Abdullah, Dance In The Grass faced nine rivals at the Esher track, including the impressive Newmarket winner, Fairy Cross. She was ridden by Silvestre de Sousa.

Drawn in the centre of the field, Dance In The Grass missed the break and as a result was short of room in the early stages. The filly raced in ninth place as Ipanema Princess made a bold bid to make all the running.

Once in line for home, Silvestre switched the filly to the outside of the field and asked her to improve. Approaching the final furlong, Dance In The Grass had made good progress to challenge for the lead, but seemed held by Fairy Cross. Keeping on well for Silvestre, and perhaps relishing the rising ground, Dance In The Grass nosed ahead in the final 100 yards to score by three-quarters of a length from Fairy Cross, the pair having pulled fully six lengths clear of the third horse, Lady Alara.

Charlie Johnston was impressed by what he saw.

‘It was Plan Z in action as she missed the break and was a lot further back than intended,’ he told the Klarion, ‘but I was impressed as she had to make up a lot of ground. Because she made such a big effort I thought she was going to pay for it in the last 150 yards, but she managed to find even more!’

Mark said: ‘One step at a time but no doubt Dance In The Grass will step up to Group company next. Looking at her physically I’d say she’ll stay further than a mile next year. Silvestre said she was better on the faster ground last time’.

Dance In The Grass, whose win gave her freshman sire Cracksman his first stakes win, holds an entry in the Moyglare Stud Stakes at the Curragh in September and is perhaps most likely to reappear there or in the Park Hill Stakes at Doncaster.

Out of the Sir Percy mare, Dance The Dream, three times a winner over a mile and a half, Dance In The Grass will surely improve with time and distance and to have scored at Listed level over seven furlongs is hugely encouraging for connections. She is also an early standard-bearer for her sire.