Group 3 for Rose Of Kildare 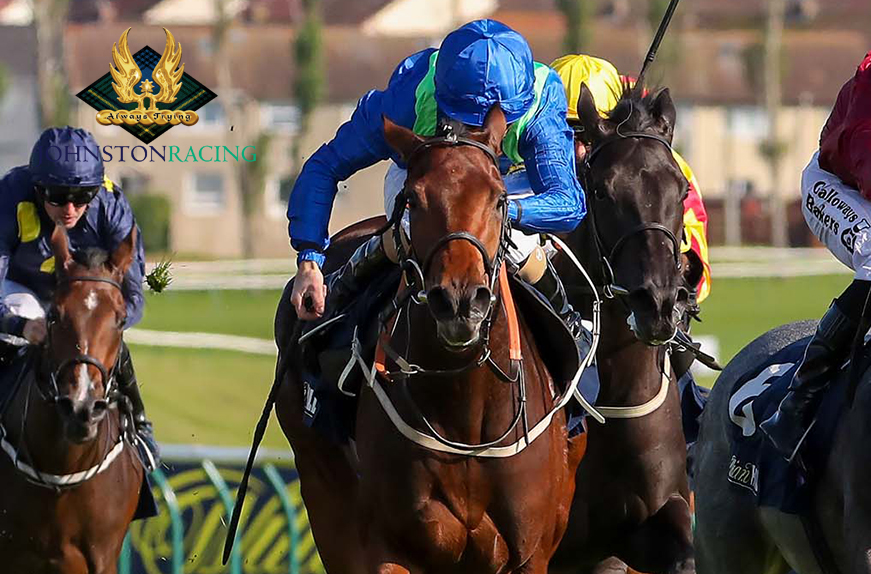 In August, Johnston Racing was able to notch up two four-timers – on August 10 and on the last day of the month. We’re delighted to report the yard managed to chalk up another fabulous four-timer on September 21.
It’s the first time since 2016 that the yard has accumulated four winners in one September day. Back then, The Last Lion’s Middle Park Stakes success was very much the highlight of a four-timer completed by Star of the East, Election Day and Rainbow Rebel.
Last month’s feat of four-winners-in-a-day also included a Group race success – and you can read about Rose of Kildare’s exciting Firth of Clyde Stakes win at Ayr elsewhere in this month’s edition.
The first winner arrived courtesy of a juvenile debutant at Chelmsford. Mr Hussain Lootah’s Seasony, a Siyouni colt, turned in a taking display to land a seven furlong novice event under James Doyle.
Seasony was sent into the lead by Doyle from the outset, and in truth he always seemed in command of the race. Shaken up by his rider with a quarter of a mile still to travel, the colt kept on well to defeat Lexington Rebel and Animal Instinct, the distances being half a length and a neck.
The colt was purchased for 55,000gns as part of Book 2 of last year’s October Yearling Sale at Tattersalls in Newmarket. He is the first foal out of the King’s Best mare, Rosie Cotton, who raced in France for Mme Pia Brandt. In addition to finishing third in the Group 3 Princess Elizabeth Stakes in 2016, Rosie Cotton won a mile maiden at Maisons-Laffitte and was Listed-placed on three occasions.
After another juvenile, Rose of Kildare, gave the yard its second winner of the day, it fell to a pair of three-year-old fillies to complete the four-timer. At Newmarket, Quintada got the better of an odds-on favourite in Stagehand when landing the fillies’ mile and a half handicap.
Kirsten Rausing’s Leroidesanimaux filly was beautifully ridden by John Egan. Stalking the favourite throughout the first nine furlongs of the race, Quintada took up the running fully three furlongs from home. Travelling strongly, she kept on well in the closing stages to score comfortably from Point In Time and Garrel Glen, the distances being two lengths and three-quarters of a length.
Quintada is out of the Golden Snake mare, Quiza Quiza Quiza, who was trained in Italy to win the Group 1 Premio Lydia Tesio. The filly is a half-sister to Maybe Today, who won a decent fillies’ handicap at the Leger meeting recently.
This was Quintada’s third career success. She clearly stays a mile and a half well, though she has acquitted herself well at shorter trips, notably when finishing third at York in May over ten and a half furlongs in a decent fillies’ event.
The four-timer was completed by Warning Fire, who secured her fifth win of the year when scoring at Wolverhampton in a seven furlong fillies’ handicap.
Sheikh Hamdan bin Mohammed’s Shamardal filly faced six rivals at Wolverhampton, and was ridden by Oisin Murphy. As Arabian Jazz set the pace, accompanied by Turanga Leela and Praxidice making a line of three up front, Warning Fire was settled in fourth by Oisin, racing on the inner.
Turning for home, Warning Fire was sent in pursuit of the leaders and ran on strongly to land the spoils from Turanga Leela and Visionara, the distances being one and a half lengths and a head.
The extent of Warning Fire’s improvement across the year is reflected in the fact that her official rating has risen from 70, in March, to 90!