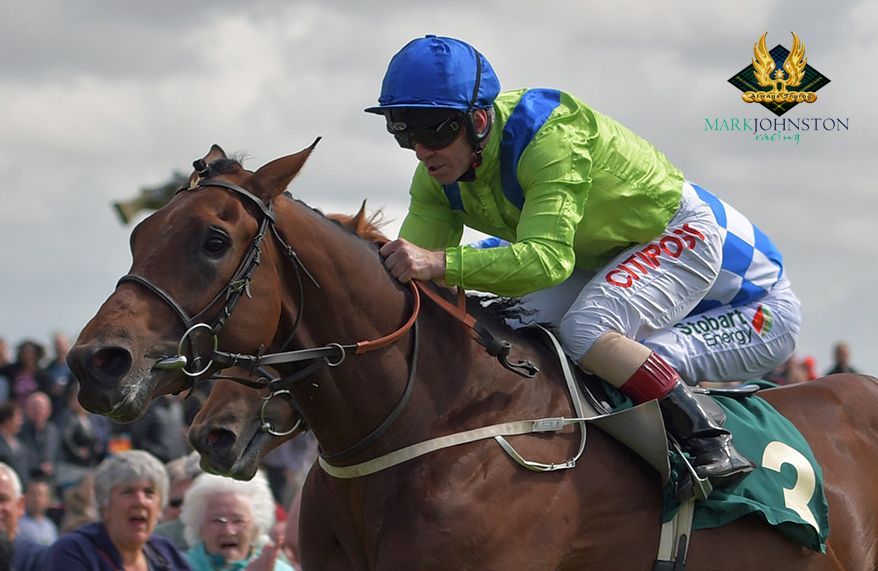 There was no stopping Franny Norton at Ripon’s afternoon meeting! Franny partnered four MJR runners, brought three home in front and one in third position.
First up was Jim Walker’s newcomer Austrian School (pictured above, winning under Franny). The Teofilo juvenile colt ran green from the off but Franny kept him working to get in the race. The penny dropped inside the last furlong and Austrian School passed the field, taking charge of affairs about 75 yards from the post to win the one-mile novice auction stakes by three quarters of a length.
Franny’s next ride could not have been more different! Lake Volta, owned by Sheikh Hamdan bin Mohammed, lined up in the Horn Blower conditions stakes over six furlongs. The flashy-looking son of Raven’s Pass made all to score by an easy five lengths. This was Lake Volta’s third outing. He had won, making all, a Brighton novice jut eight days earlier under Silvestre de Sousa.
David Abell’s Katebird completed the MJR treble. The three-year-old daughter of Dark Angel made all in the 10-furlong handicap to win by three lengths. This was Katebird’s fourth career win.
The Blues Master, a grey gelding by Mastercraftsman, owned by the Hjw Partnership, ran in the 12-furlong handicap where he took third place.
A very nice afternoon at Yorkshire’s garden racecourse for the MJR team. Congratulations to all involved!