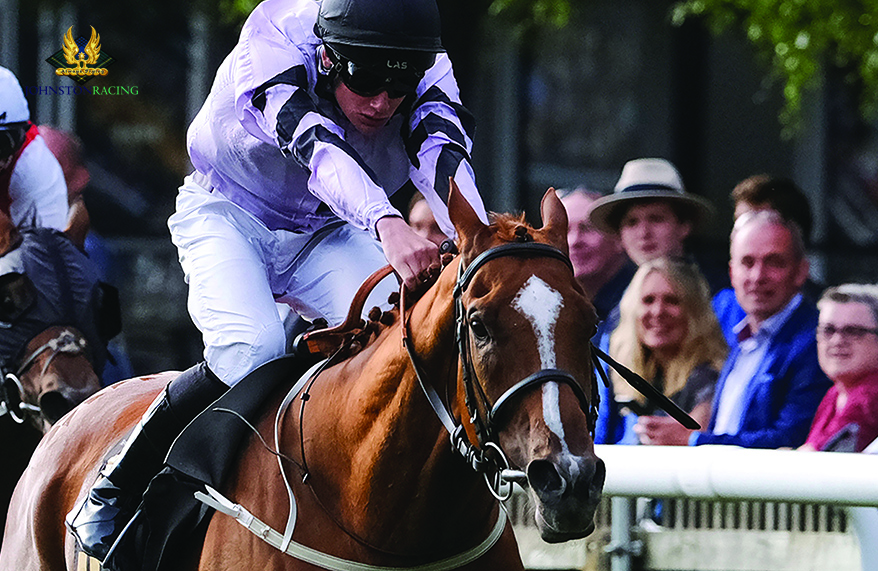 The Australia colt, Struth, made the perfect start to his racing career at Nottingham on August 9, landing a restricted maiden over an extended mile in an authoritative display.

The colt, owned by Mrs S Russell and A M Russell, was making his debut in a field of eight runners for the race and was drawn widest of all. Jason Hart took the ride.

Moltisanti made the early running, while Struth raced prominently on the outer. After a couple of furlongs, Jason was able to settle Struth in second, racing on the outside of the leader.

In the straight, Moltisanti and Struth matched strides, but despite showing signs of greenness Struth went into the lead with two furlongs to race. Keeping on strongly all the way to the line, Struth forged clear to score by three and three-quarter lengths from Going To The Moon, with The Goat a neck away in third.

Given that the colt is by the Derby winner out of a Listed-placed mare whose three wins all came over a mile and a half, it’s pleasing to see that Struth was able to win so early in his racing career. ‘He is a horse that feels like he will stay strongly,’ winning jockey Jason Hart commented after the race. ‘He has got a good attitude and there is more to come, while he will sharpen up for the run.’

The dam, the Peintre Celebre mare, Portrait of a Lady, won those three races for Henry Cecil and owner Jon Shack, and Struth is a half-brother to the Listed winner, Miss You Too, and the Curragh maiden winner, Vitruvian Man, who were both by Montjeu.

A £17,000 purchase by Johnston Racing at Tattersalls Ireland September Yearlings Sale, this is definitely a colt to look forward to as a three-year-old and anything he does this year is a bonus.

The Muhaarar filly, Qipao, won her first two races as a juvenile last term before running fourth (behind Inspiral) in the Listed Star Stakes at Sandown.

She bounced back to form at Beverley on August 10, pouncing late to land a seven and a half furlong handicap right on the winning line.

Chasemore Farm’s filly started the year on a tough handicap mark and has been tried over longer trips of up to a mile and a quarter. Ridden by Ben Curtis at Beverley, the filly raced in third place of the four runners in the opening stages.

Despite the small field, there was no shortage of excitement in this race. The odds-on favourite, Liberation Point, came to win his race, taking the lead with a furlong to race. However, both Qipao and Reputation came with strong late runs, and the Kingsley Park runner just got up on the line to win the race on the nod.

Qipao certainly ran as though a longer trip would suit. However, her pedigree doesn’t really support that. She is out of the Red Clubs mare, The Gold Cheongsam, whose four victories all were recorded between six and seven furlongs, and Muhaarar’s four Group 1 wins were all achieved over sprint distances.

What a year Dutch Decoy is having! The five-year-old Dutch Art gelding registered his fifth win of 2022 when landing a Newmarket handicap in a thrilling finish on August 12.

Owned by Owners Group 052, Dutch Decoy seems to enjoy racing over a mile these days. The Newmarket race saw a field of 11 go to post for the feature event on the card, a handicap run over the straight mile of the July course. His now regular pilot, Oli Stammers, was in the saddle.

Content to allow his mount to race in rear in the early stages in the middle of the track, Oli Stammers produced Dutch Decoy to challenge for the lead at the furlong pole. There then followed a protracted battle with the four-year-old Bashosh, and although Dutch Decoy drifted left across the track, carrying Bashosh with him, Oli Stammers did all he could to correct him and at no point did Cameron Noble have to stop riding.

As the pair passed the winning post, Dutch Decoy got the better of the verdict by a short head, with Enigmatic a length away in third.

This win has seen Dutch Decoy’s rating soar to a career high of 88….not bad after his twentieth race of 2022. His career tally of wins now sits at eight, just one behind his full brother Dutch Masterpiece, whose wins have all come at five or six furlongs!