Death of a legend 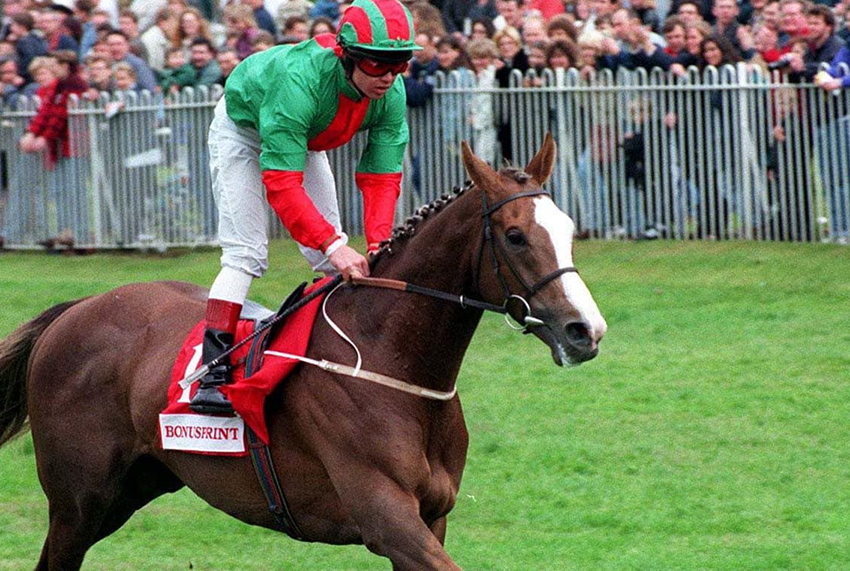 Double Trigger, the legendary stayer whom Mark trained to land the Stayers’ Triple Crown in 1995, has died at the grand old age of 28 years and 11 months. The chestnut son of Ela-Mana-Mou died on February 23 in his paddock at John and Sarah Haydon’s Clarendon Farm Stud in Wiltshire. It is suspected that the horse suffered a heart attack.
Trigger was a remarkable horse in so many ways. Purchased for just 7,200 Irish Punts at the Goffs Orby Sale in 1992, he was unbeaten as a juvenile. He surprised everyone on debut at Redcar, romping to a 10 length success in a six furlong maiden, before landing the Listed Zetland Stakes over ten furlongs at Newmarket, giving Mark the first of his five winners of that particular race.
As a three-year-old, Double Trigger was forced to spend many months on the sidelines through injury, only returning to the track in August. Even so, he finished third in the St Leger at Doncaster before landing the Italian equivalent at Turin later that autumn. 1995 proved the great horse’s annus mirabilis. His five wins during the year included the Ascot Gold Cup, the Goodwood Cup and the Doncaster Cup, the traditional stayers’ Triple Crown. His defeat of his full brother, Double Eclipse, at Goodwood remains one of the most memorable wins of any Johnston-trained horse.
Double Trigger won the Sagaro Stakes and the Henry II Stakes in 1996 before finishing second to Classic Cliche in his attempt to retain his Gold Cup crown. He added a second Doncaster Cup win later in the year, and in the following season gained his revenge on Classic Cliche when landing the Goodwood Cup.
Second again in the Ascot showpiece in 1998, he rounded off his career in style by winning the Goodwood and Doncaster Cups. At Doncaster, he was given a great reception by the Yorkshire crowd, led into the winners’ enclosure, and into retirement, by an emotional Geordie Charlton and a young Robynne Watton. It was a typical Trigger success, finding more for Darryll Holland in the closing stages to hold off the late challenge of Busy Flight having made every yard of the running, stalked by the joint favourite Canon Can.
Mark Johnston paid tribute to the great horse on the stable website. “It seems that, no matter what champions I trained or might be lucky enough to train in the future, I will always be remembered more for having trained Double Trigger than for anything else. He captured the public’s imagination like no other animal I have been associated with, and rightly so.” Taking comfort from the fact that Double Trigger appeared to be ‘in rude health until the end’, Mark asserted that Double Trigger had enjoyed ‘a life well lived’.
Owner Ron Huggins also paid fulsome tribute to the horse. “Double Trigger was the horse of a lifetime for us,” he told the Racing Post. “Horses like him become ‘public horses’ and the amount of fan mail and messages we used to get about him was phenomenal.”
Jason Weaver rode Double Trigger to 10 of his wins, including in all three elements of his stayers’ triple crown, remembered the horse fondly. “He won Cups all around the country, whether it was at Doncaster, Goodwood or Ascot, and everybody loved him,” he told the Racing Post when news of Trigger’s death broke. Recalling the horse’s early appearances on Middleham Moor, Jason reflected: “He was just a playboy early doors and before he ran he did one decent piece of work at home and went on to win at Redcar, which made everyone sit up and take notice. He just kept improving from there.”
Bloodstock expert Tony Morris once summed up Double Trigger and his career perfectly in one sentence. It seems appropriate to finish this reflection with Tony’s well chosen words: “Few horses in history have displayed in such full measure the class, courage, stamina and durability that were his hallmarks.”