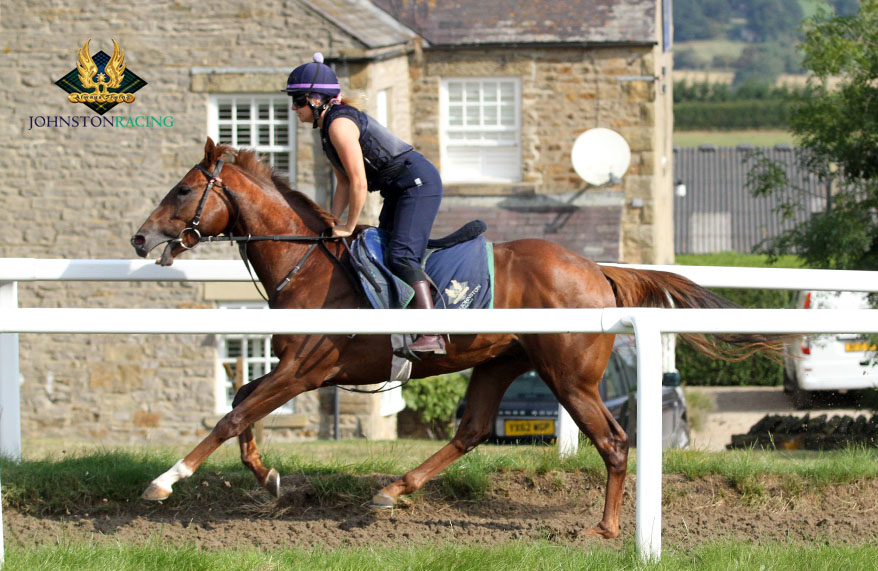 The yard scored a brace of weekend doubles on August 13/14. Saturday’s racing saw Hope You Can Run and Miss Dynamic land a juvenile double at Doncaster, while Tippy Toes and Maggie’s Delight were Sunday winners for the stable, at Chelmsford and Pontefract.

Having his first run in handicap company, and stepping up to a mile from seven furlongs, Hope You Can Run opened his winning account at the fourth time of asking at Doncaster.

With just three runners going to post, the field raced in Indian file until the closing stages, with Daniel Muscutt happy to track Transfer Affection in second. Mick Doyle’s Lope de Vega colt was travelling comfortably, but conceding 12lb to his rival it took a while for the colt to get on top.

Keeping on strongly in the final half furlong, Hope You Can Run scored by a neck from Transfer Affection, with Haughty trailing in over seven lengths back in third.

Hope You Can Run is out of the Smart Strike mare, Shelbysmile, who won five races in Canada and the USA, and the colt is a half-brother to Chancellery, by Medaglia d’Oro, who won a Longchamp juvenile event last autumn and finished third in Deauville’s Group 3 Prix Thomas Bryon.

A €115,000 purchase at Goffs Orby Yearling Sale, this fellow looks likely to make into a decent three-year-old.

The Donny double was completed when Jane Newett’s Miss Dynamic ran out the comfortable winner of the fillies’ maiden over a mile.

The Cracksman filly made her debut in a competitive maiden at the Qatar Goodwood Festival, but ruined her chance ducking right at the start. At Doncaster, she faced just four rivals, including the favourite, Pride Of The Pack, and was ridden by Cieren Fallon.

Miss Dynamic made a fast start, taking the lead and crossing to the far rail from the outset. She was pursued principally by Honeymooner in the early stages. Three furlongs out, both Honeymooner and Pride of the Pack looked set to launch significant challenges, but as the favourite fell away, it was Honeymooner who looked the sole danger. To her credit, Miss Dynamic kept finding more to stretch away from that rival again, and, despite wandering right in the closing stages, she stayed on well to score by a length and three-quarters from Honeymooner, with over eight lengths back to Pride Of The Pack in third.

This filly, the eighth winner for her first-season sire Cracksman, is out of the Group 1 Beverly D Stakes and Flower Bowl Invitational winner, Dynaforce, and is thus a half-sister to the Listed winner and Park Hill Stakes (Group 2) runner-up, Aljezeera (by Frankel). Bought for 78,000gns by Johnston Racing as part of Book 2 of Tattersalls October Yearling Sale, this is an exciting filly who, given her sire, should improve for age and distance.

Tippy Toes landed a thoroughly deserved success in a six furlong handicap at Chelmsford on August 14.

Colin Bryce’s Havana Gold filly won at Chelmsford in a Listed race in April, and since then has been running well in decent company. At Chelmsford, she was dropped into handicap company for the first time since contesting the Palace of Holyroodhouse Stakes at Royal Ascot. A field of six went to post for the race, with Franny Norton taking the ride on the filly for the first time.

Awkward at the start, Tippy Toes recovered to lead after a furlong or so. Racing on the rail, Tippy Toes was travelling strongly as the field came into the straight. Aramis Grey emerged as the only real danger, but Tippy Toes was always doing enough for Franny and passed the winning post a length ahead of that rival. Lovely Breeze finished third, a length and three-quarters behind Aramis Grey.

This was a fourth career win for the filly, who is out of the Oasis Dream mare, Mullein, a Listed winner over six furlongs at Pontefract who finished third in the Group 2 Diadem Stakes at Ascot. Tippy Toes is a half-sister to the multiple sprint winner, Tarboosh, and to the dual Group-placed, Carry On Deryck, by Halling. She has now run five times at Chelmsford, winning four races and being placed second in the other.

The Sunday double was completed in spectacular style by Maggie’s Delight at Pontefract, who won a stayers’ handicap by 14 lengths!

Paul and Clare Rooney’s three-year-old Mastercraftsman filly has been lightly raced. This was just the fifth outing of her career, and a step up in trip to a mile and three-quarters at Yarmouth last time brought out her best performance to date.

A field of five went to post for the handicap over an extended 17 furlongs, with Maggie’s Delight one of two three-year-olds in the field. Richard Kingscote took the ride, and sent Maggie’s Delight into the lead from the outset.

Around halfway, Paul Mulrennan sent the favourite, Yagood, a proven stayer, into the lead and Maggie’s Delight was soon about 10 lengths in arrears. However, on the rising ground Maggie’s Delight began to close the gap, and she regained the lead with two furlongs left to run.

Maggie’s Delight is out of the Listed-place Mustanfar mare, Motheeba, and is thus a half-sister to the Leopardstown 1,000 Guineas Trial (Group 3) winner, Keeper of Time, by Mehmas.