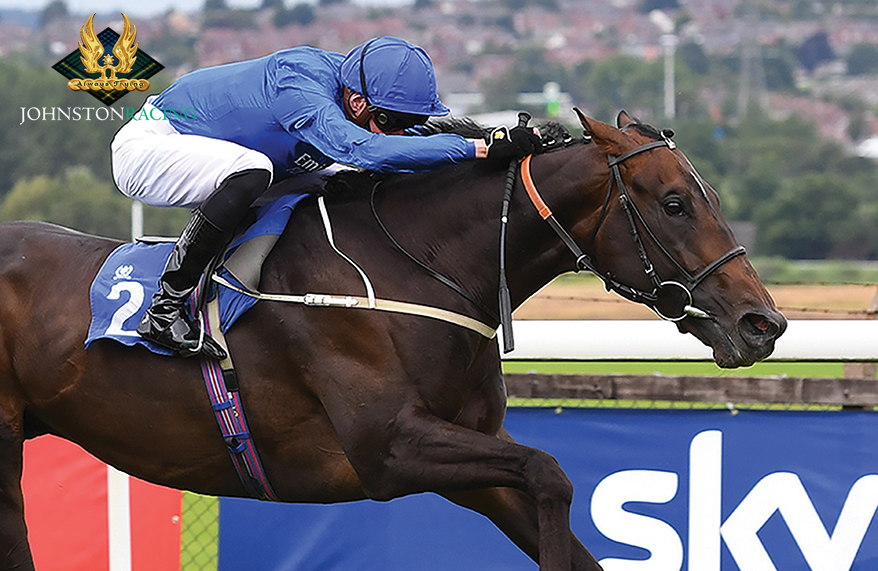 Dark Vision continued his excellent season with a thrilling win at Group 2 level at Baden-Baden on September 11.

Godolphin’s Dream Ahead four-year-old colt has enjoyed a tremendous campaign in 2020. A fine victory over Montatham in the Royal Hunt Cup at Royal Ascot was followed by a win at Listed level in Pontefract’s Pomfret Stakes. It has all represented a fantastic return to form of the colt who stirred us all with that remarkable performance in landing the Group 2 Vintage Stakes at Goodwood in 2018.

The latest step in his campaign saw him travel to Germany for a tilt at the Oetinngen-Rennen, a mile event held at Iffezheim Racecourse at Baden-Baden. This race, established in 1927, was originally known as the Badener Meile. It was promoted to Group 2 status in 2003, and has already been won by two Johnston-trained horses in White Heart (1999) and Lovelace (2008).

Despite the difficulties with travel and quarantine arrangements, Franny Norton was able and willing to travel to Germany for the ride and was reunited with Dark Vision for the first time since the colt’s successful racecourse debut at Yarmouth as a juvenile.

Among Dark Vision’s seven rivals for this year’s renewal of the race were the French-trained filly, Half Light, a runner-up in the Prix Rothschild (Group 1) on her last start, and the German-trained Prix Daphnis winner, Thorin. It turned out to be a quite remarkable race, as Dark Vision raced in last place throughout the first half of the race as Los Campanos set the pace.

As the field turned for home, they split right across the track leaving plenty of room for Dark Vision to mount a challenge. Racing on the near side, Half Light came through to pick up the lead with a furlong to race. In the final furlong, however, Dark Vision switched on the after-burners and finished with a rattle to hit the front in his final stride, just edging Half Light by a nose, with Rubaiyat half a length back in third.

‘We had warned Franny Norton that Dark Vision could be slowly away, but I was basically thinking that we couldn’t win from there,’ Mark confessed after the race.

‘Then I reminded myself that I had said exactly the same thing when he was a two-year-old in the Vintage. It was a little bit tighter today than the Vintage, but was just as exciting a race. The gap opened and it was wonderful.

‘It was a great ride from Franny, a typical never-give-up effort, and I am absolutely delighted. We have no immediate plans, but a Group 1 victory would repay Sheikh Mohammed for his faith in buying the horse.’

Franny said: ‘I expected to win before we came over, but I didn’t down the back because Dark Vision ran into the race very lazily.’

Paying tribute to William Buick for the advice he had given about how to ride the horse, Franny said his advice had been spot on.

‘William said to me that I would feel at halfway whether he would win or not and I know exactly what he meant because I felt really good at halfway. Once we went up the straight, this lad picked up well and finished them off like he usually does. He was flying in the final furlong.’

Dark Vision seems to be improving again, and one thing is for sure . . . there’s never a dull moment when he’s around!