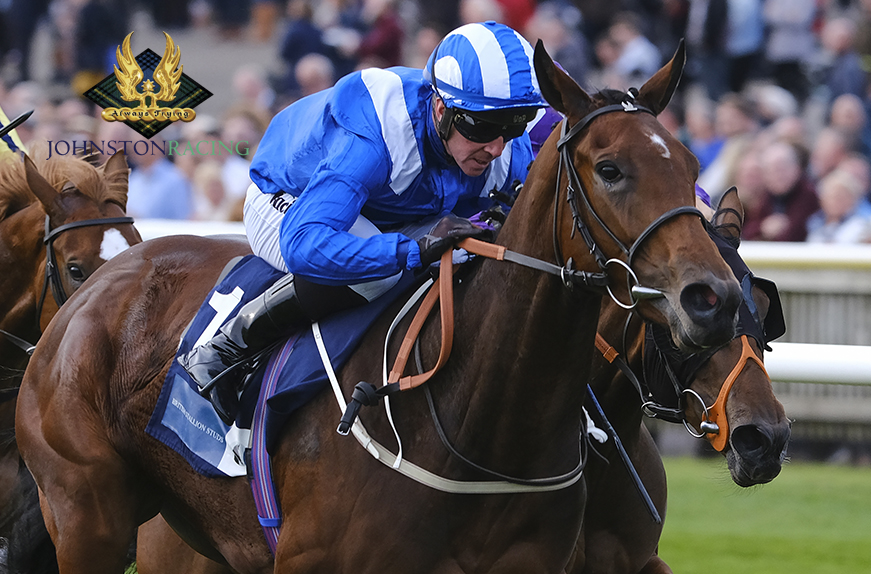 Joe Fanning is a master of riding races from the front. He also knows everything there is to know about riding a race at Hamilton Park.
The latest horse to benefit from these attributes was Welcoming, who won a fillies’ handicap at the Lanarkshire track on September 22. The No Nay Never filly, owned by Tactful Finance Limited, was having her seventh run for the stable, having switched to Kingsley Park in June of this year.
It turned out to be a lucky seventh start. One of four three-year-olds in a field of nine for the race over an extended mile, Welcoming was sent into the lead by Joe straight from the start of the race. Joe judged his race to perfection to the extent that the filly was clear of her field in the final furlong, racing home unchallenged to score by two and a quarter lengths from Sarvi, with Iconic Code a neck back in third.
This was a second career win for Welcoming, who is out of the Peintre Celebre mare, Love over Gold, a winner over 11 furlongs as a three-year-old in France.
Twice a winner in July of this year, Mister Chiang notched up a third win of the season in a Southwell handicap on September 26.
Owned by The Originals, the Archipenko colt was racing over a trip of two miles for the first time. Ridden by a confident Franny Norton, Mister Chiang led the way in the early stages, pursued by the former Kingsley Park inmate, Pumblechook.
Travelling strongly, Mister Chiang was more than a match for his eight rivals. At the winning line, he had six lengths to spare over the second horse, Tigray, who in turn was two and a quarter lengths clear of the third horse, Colwood.
A consistent and likeable type, Mister Chiang looks to have more to offer now he has been stepped up in trip. His dam, the Robellino mare Robe Chinoise, stayed a mile and three-quarters well, while his full-sister Madame Chiang landed the British Champion Fillies and Mares Stakes over a mie and a half at Ascot.
A step up to racing over seven furlongs worked the oracle for Huboor, who ran out the game winner of a valuable Newmarket nursery event on September 28.
Hamdan al Maktoum’s More Than Ready filly won at Chepstow in July over six furlongs, but found things happening all a little too quickly for her at Chester on September 14.
Stepped up to seven furlongs for the Jersey Lily Fillies’ Nursery on the Rowley Mile, Huboor raced strongly in the centre of the track for Jim Crowley. Striking the front a furlong from home, she kept on strongly to score by half a length from Separate, with Last Surprise two lengths back in third.
This was a second win in four starts for Huboor, who cost €230,000 when purchased at Goffs November Foal Sale in 2017. Clearly, she is a filly to keep an eye on. Huboor’s win on gave the yard its 227th British winner of the year, our best ever tally.