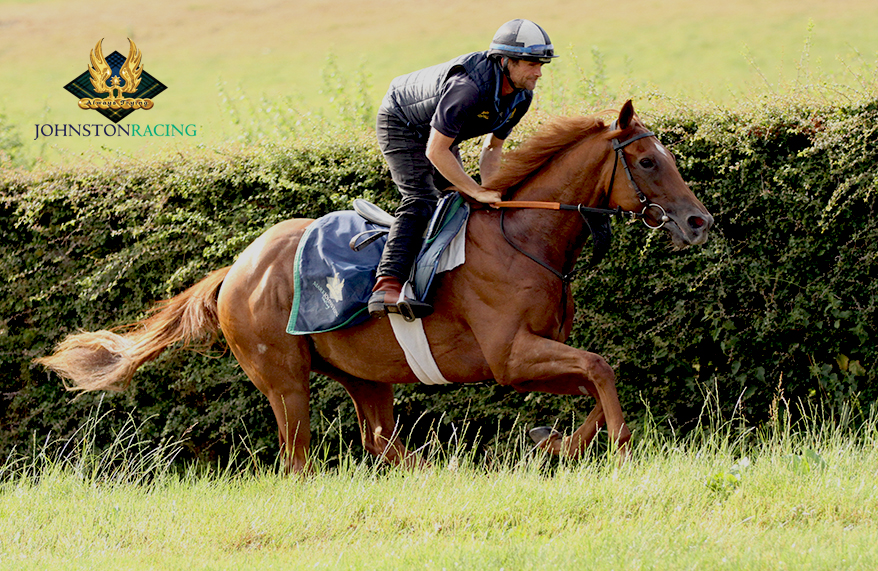 The yard chalked up another across-the-card double on July 6, when Urban Sprawl landed a Catterick nursery before Cabinet Maker opened his winning account at Kempton.

In a race won last year by Johnston Racing’s Highland Premiere, Urban Sprawl (pictured above under Jimmy Goodall), stepping up to seven furlongs for the first time, carried top weight and faced five rivals. The Iffraaj colt, owned by Sheikh Hamdan bin Mohammed, was ridden by Jason Hart and was looking to build on the promise of a decent second at Ayr last time out.

Smartly away, Urban Sprawl was sent into the lead from the start, with Machito challenging for the lead on his outer. None of the other runners was able to get into the race, which developed into a duel between the two early leaders in the straight. Always just holding the upper hand, Urban Sprawl kept on strongly for Jason to score by half a length from Machito, the pair three and three-quarter lengths clear of the third horse, Manwhothinkshecan.

Clearly suited by the step up in trip, Urban Sprawl is nonetheless out of the Grand Reward mare, City Glam, a Group 1 winner over five furlongs in Argentina. A half-brother to Dubai Hope, a four-year-old Invincible Spirit filly who has, to date, scored four times for Saeed bin Suroor, Urban Sprawl posted a decent time in winning at Catterick  and appears to be on the upgrade.

At Kempton, the three-year-old Mastercraftsman gelding, Cabinet Maker, was one of ten horses to go to post for a handicap over a mile. Owned by Kennet Valley Thoroughbreds XII, the gelding was placed in two of his three runs as a  juvenile, including once at Kempton, but had still to register a first win.

Ridden by Richard Kingscote, Cabinet Maker raced in rear in the early stages and was brought over to race on the inside rail.

Turning for home, Cabinet Maker had only one horse behind him, but benefitted from the cutaway to launch a challenge on the inside. Even well inside the final furlong it would not have been obvious to call him the likely winner, but to his credit he kept on strongly to see off Flintstone, who also launched a challenge from the back of the field, by half a length. One of the joint favourites, Sicilian Vito, took third place, finishing a further three-quarters of a length back.

Looking at Cabinet Maker’s form as a whole, it would appear that he is better suited by all-weather tracks, but connections will be hoping that this win serves as a confidence booster. Certainly, Derby-winning jockey Richard Kingscote deserves credit for a tenacious and well-judged ride.