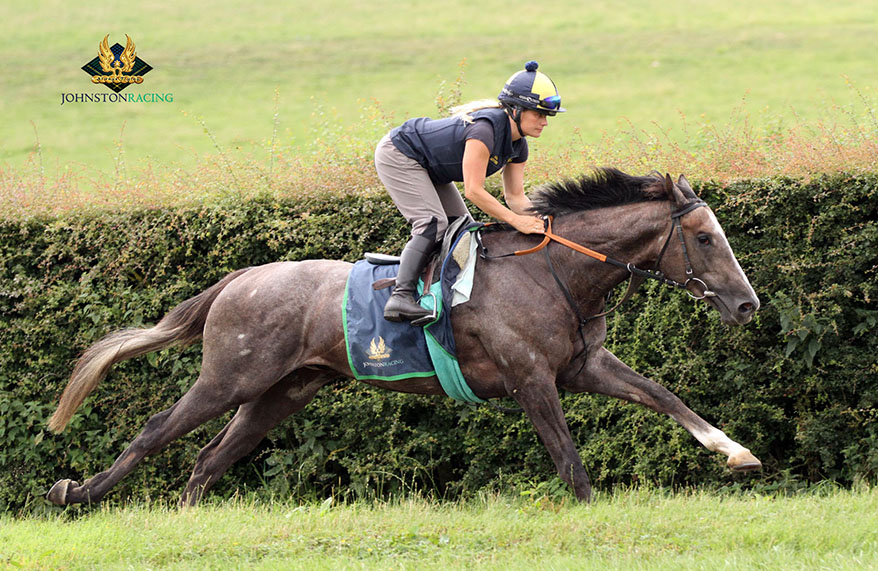 Kempton’s card on August 8 saw the yard chalk up a 439-1 treble, with all three winners ridden by Derby-winning jockey Richard Kingscote!

First into action for the Johnston team was Cabinet Maker, who landed his third win of the summer in the mile handicap. Successful over course and distance in early July, Kennet Valley Thoroughbreds’ Mastercraftsman gelding followed up with a win at Chelmsford, but was out of luck on his hat-trick attempt at Wolverhampton last time out.

Sadly, the race proved dramatic as one of the 13 runners fell and was fatally injured, and another of the runners unseated his rider. Cabinet Maker took a while to find his stride and was racing towards the rear when Take A Stand fell. Slightly hampered in the incident, Cabinet Maker was switched right by Richard Kingscote and made good progress throughout the closing stages to hit the front just yards from the winning post.

Cabinet Maker won by a neck from They Don’t Know, who held off the challenge of Non Stop for second by half a length.

The penny has really dropped for Cabinet Maker now and it’s clear that Richard Kingscote has struck up a good relationship with the gelding as he has now been in the saddle for all three of his wins.

Lady Lavina was next into the Kempton winners’ enclosure with a battling success in the seven furlong juvenile novice event.

Cloud 9 Racing and Partner’s filly by The Last Lion was having her fifth career start, having finished second in two of her four previous runs. She faced four rivals, including an odds-on favourite in Enola Grey, who was fresh from running third in a competitive maiden at the Qatar Goodwood Festival.

Drawn on the outside of the party, Lady Lavina was sent into the lead by Kingscote and was pursued by Munch on his outer.

David Probert sent Munch into the lead with two furlongs to race, but Lady Lavina kept on well for Richard Kingscote, regaining the lead inside the final furlong and keeping on well to the line to score by a neck. Munch held off the favourite, Enola Grey, by a length and a quarter for third.

Bred by the Johnstons at Friar Ings Stud, Lady Lavina is out of the Giant’s Causeway mare, Step This Way, whom Mark trained to win the Queen Mother’s Cup at York for owner, Stuart Counsell. Lady Lavina is a half-sister to Laureate (by Poet’s Voice), twice a winner over hurdles in Ireland.

The Kingscote-inspired treble was completed when Crackovia recorded a facile success on her first start in nursery company.

Owned in partnership by Jane Newett and Dougie Livingston, the Cracksman filly Crackovia won a fillies’ maiden at Beverley in good style in June, but was put in her place by Novakai at Doncaster on July 16.

Just four runners went to post for the Kempton race, but they included the odds-on favourite, One World, who has chased home the highly-rated One Nation at Newmarket last time out. Crackovia was stepping up in trip from seven furlongs to a mile.

Crackovia was sent into the lead by Kingscote in the early stages and was, in truth, never troubled throughout the race. The expected challenge of One World failed to materialise, and once Crackovia had shaken off the attentions of Fahari in the straight, she came home in splendid isolation, winning by seven and a half lengths from One World, who just got up in the shadow of the post to pip Fahari for second.

The filly is out of the Listed-placed Giant’s Causeway mare, Olvia, who won twice as a juvenile in France. She is a half-sister to Olanthia, by Zamindar, who won a Longchamp maiden over 10 furlongs.

A fabulous day, then, for the yard and for Richard Kingscote, who currently boasts a 47% record when riding for the stable during the current jockeys’ championship.