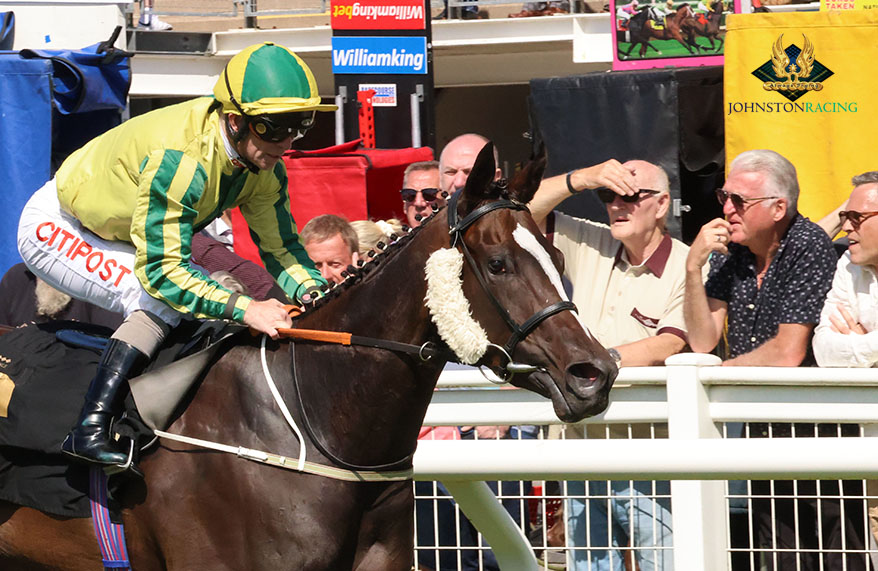 Baileys Liberty, Whitefeathersfall and Toussarok all contributed to an across-the-card treble for Johnston Racing on July 7.

At Carlisle, Baileys Liberty (pictured above) shed her maiden tag at the 11th time of asking. The daughter of Iffraaj, owned by G R Bailey Limited, turned in two decent efforts in her early juvenile runs and, to some extent, has been struggling to cope with the resultant initial handicap mark allotted to her.

Stepping back up in trip to seven furlongs on this stiff track, and dropped a little in the handicap, Baileys Liberty was ridden by Franny Norton and quickly established herself in second place behind the free-going leader, Yeeeaah.

Always travelling strongly, the filly came to press the leader with a quarter of a mile still to race. Largely as a result of Yeeeaah beginning to hang left, the leaders drifted across the course to the extent that Baileys Liberty found herself racing on the stands’ rail. Well on top in the closing stages, Baileys Liberty scored by a length and a quarter from Yeeeaah, the pair two and a half lengths clear of Monhammer in third.

Baileys Liberty is a third winner out of her owners’ Bahamian Bounty mare, Baileys Jubilee, a French Listed winner who was trained by Mark to finish a close third in the Group 1 Cheveley Park Stakes in 2012.

Franny Norton completed his Carlisle double on Whitefeathersfall, who also registered a first career win in this his debut as a three-year-old.

The Zoffany colt, owned by Mrs Christine Budden and Partners, was stepping up in trip to beyond a mile for the first time in this nine furlong handicap which was contested by six runners.

The race followed a similar pattern to Baileys Liberty’s win. Racing in second place behind the early leader, Lucia Joy, Whitefeathersfall was sent into the lead by Franny around the two furlong pole. Stretching clear of his rivals with a furlong left to race, Whitefeathersfall came towards the stands’ side and kept on well to score by one and three-quarter lengths and two lengths from Persist and Million Thanks.

Whitefeathersfall is out of the owners’ Grand Slam mare, Naomh Geileis, twice a winner for connections in her racing days. He is the sixth individual winner out of the mare, and is a half-brother to such as Alexander M, Assault on Rome and Rebel Assault.

The treble was completed at Epsom’s evening meeting, where Toussarok landed his second win of the year in a six furlong handicap.

The locally trained Pablo del Pueblo set off like a scalded cat, followed by Toussarok in a clear second. Racing nearer the rail than the leader, Toussarok was sent to challenge with a furlong and a half to race. In a clear lead a furlong from home, Toussarok kept on well to defy the late run of Indian Creak, passing the post half a length ahead of that rival, with the fast-finishing Prince of Bel Lir a length and a quarter back in third.

This was a sixth career success for Toussarok, who has won as a juvenile, a three-year-old and now as a four-year-old.