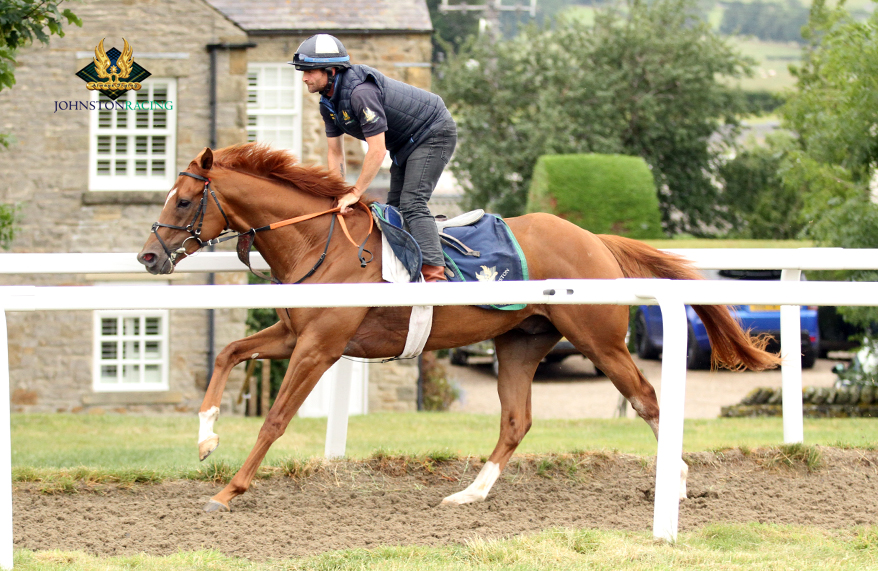 An across-the-card double on July 4 gave Johnston Racing a decent start to its July campaign. The exciting juvenile Dornoch Castle (pictured above under Jimmy Goodall) scored at Ayr, while Rainbow Colours completed the double with a game success at Ripon’s evening meeting.
Dornoch Castle created a very favourable impression on debut at Haydock on June 18. The Gleneagles colt, owned by John Brown and Megan Dennis, made all the running under Cieren Fallon to run his seven rivals ragged in a restricted novice event.
At Ayr, Dornoch Castle faced seven rivals in another seven furlong novice event, and was sent off at long odds-on to win despite being penalised for that Haydock success. Drawn low, the colt was quickly away under Cieren Fallon and went straight into the lead on the rail.
Shaken up by Fallon with three furlongs to race, Dornoch Castle pulled clear of the field and quickly put the race to bed. Pushed out throughout the final furlong, Dornoch Castle was eased in the final strides and scored comfortably by two and a quarter lengths from Common Acclaim, with Ramz a short head back in third.
Dornoch Castle is the sixth of seven foals and the fifth winner from as many runners out of the unraced Zamindar mare, Crown Light. Crown Light is a half-sister to the Prix Vermeille (Group 1) winner, Bateel, and to the Listed winner, Basemah. Dornoch Castle is also a half-brother to Claim The Crown, by Acclamation, who won a handicap over a mile and a quarter at Ripon later in the day at Ripon.
Speaking after the race, Mark Johnston was keen to point out that it is dangerous to take things for granted with inexperienced juveniles. ‘After Haydock, it might have been tempting to step Dornoch Castle up in class,’ he admitted, ‘but we felt he would benefit from the experience of coming here first. We’re in the fortunate position of having half a dozen good juveniles over seven furlongs. I think this horse is likely to go for the Vintage Stakes at Goodwood.’
The double was completed at Ripon, when Sheikh Hamdan bin Mohammed’s Rainbow Colours posted a game success in a mile handicap.
Successful at Ripon as a two-year-old last term, Rainbow Colours was stepping down in trip from her last outing at Haydock and had also been eased slightly in the handicap. The Dark Angel filly, a half-sister to the Middle Park Stakes winner Amadeus Wolf and to the yard’s three-time winner, Always A Rock, was one of just three three-year-olds in a field of 11 who lined up for the Ripon race. The consistent and in-form seven-year-old, Poet’s Dawn, headed the market.
Jason Hart kept things admirably simple on Rainbow Colours. Sent into the lead straight from the outset, Rainbow Colours travelled strongly in front, pursued by the favourite, racing on her outer.
Kept up to her work by Jason throughout, the filly, perhaps enjoying the step down in trip, galloped on relentlessly. Poet’s Dawn was never able to get on terms, and at the post Rainbow Colours had won by a length and three-quarters, with Greek Kodiac the same distance back in third.
Rainbow Colours is unbeaten at Ripon (two wins from two starts) and showed a game attitude in this pillar to post success.