Diamond Sparkles at Chester on a four-winner day! 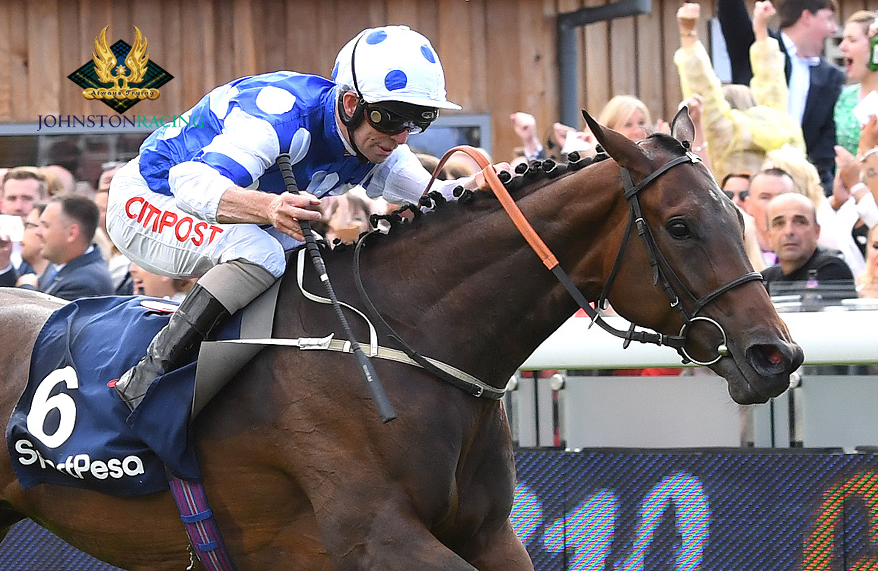 On a busy Saturday for Johnston Racing on August 31, at Chester, Markus Graff’s homebred Vivid Diamond (pictured) led stablemate Persian Moon home in the Listed Chester Stakes over a mile and six and a half furlongs. A small but select field went to post for this Listed race. Simon Crisford’s Outbox was sent off the market leader, and Dermot Weld sent the six-year-old Argentinian Group winner Stivers to contest the race.
Persian Moon made the running under Jason Hart, but as the field bunched approaching the final turn, Franny Norton switched Vivid Diamond off the fence to go through the narrowest of gaps. Once in the clear, Vivid Diamond extended well to score by five lengths from Persian Moon, who in turn led Outbox home by four lengths.
Vivid Diamond’s win also gave the yard its 200th British win of 2019.
This was the yard’s second winner of the Chester Stakes, following on Lady Eclair in 2010. However, it was Mark’s first winner since the race became a conditions event in 2018.
Freya stepped up on her promising debut run at Salisbury to land her first win in a Beverley novice event.
Mrs A G Kavanagh’s Gleneagles filly showed good speed at Salisbury before losing out to Elegant Erin in the closing stages. At Beverley, Freya was stepping up in trip slightly to seven furlongs and 96 yards.
Freya was well enough away under Joe Fanning and raced prominently, tracking the leader, Afraid of Nothing under Danny Tudhope. As the field approached the final furlong, Freya seemed to be going nowhere fast on the rail. Switched left by Fanning inside the final furlong, she gradually wore down the leader to score by a head in the driving finish. The third horse, Violette Szabo, was fully six lengths back in third.
Freya is out of the Danehill mare, Crystal Valkyrie, making her a half-sister to a number of winners, including Above Average, who won the Group 3 Sandown Classic Trial before being Group 2 placed in Australia.
At Chelmsford City, Fuwayrit built on his recent Ayr win, recording a comfortable success in a novice median auction event over six furlongs in the hands of Frankie Dettori.
H E Sherida Al-Kaabi’s Gutaifan colt was one of eight horses to go to post at Chelmsford City. Frankie kept things simple on him, making all the running and asking for the grey colt’s effort with just over a furlong to run. In command throughout the final furlong, Fuwayrit was able to be eased by his jockey in the closing stages.At the post, Fuwayrit won by two and a quarter lengths from Music Therapist, with Emten a length and a quarter back at third.
Kingsley Park 13’s King’s Caper landed another win to complete his hat-trick. Only three runners went to post for the mile conditions event on Chelmsford’s Saturday night card. Frankie Dettori had King’s Caper away smartly and he duelled with Saqqara King for the lead, while Wind Thunder tracked them both. King’s Caper improved to regain the lead two furlongs out, and in the straight he stayed on well to score by one and three-quarter lengths from Wild Thunder, who passed the weakening Saqqara King in the closing stages.
This was a good performance from the son of New Approach, who bagged a prize of over £16,000 for his delighted connections.