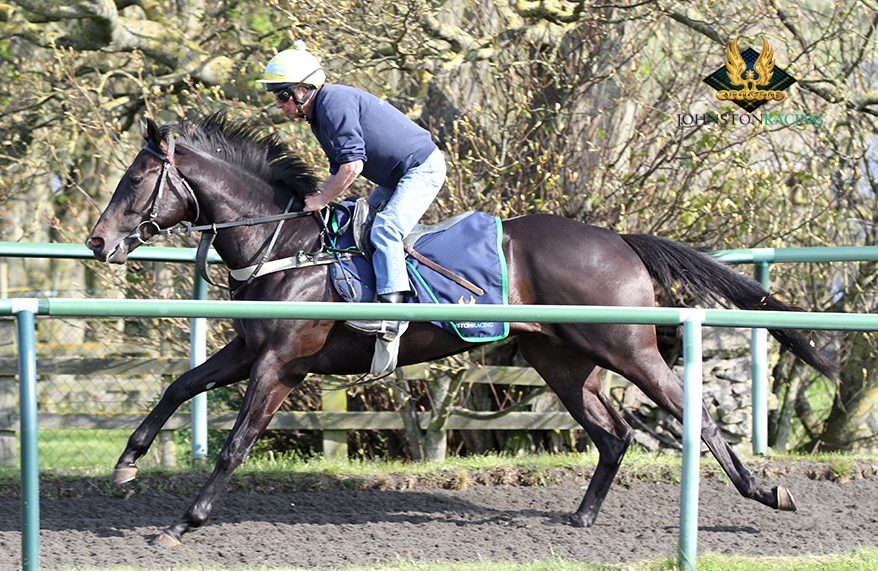 The yard scored a quickfire double of juvenile wins on the evening of June 27, when Fred and One Hart scored at Leicester and Hamilton Park respectively.
The Burke Family’s Fred had one previous run prior to Leicester. Having shown up well in his work at home, he was sent to Ayr to contest a six-furlong maiden race in May. Noisy and green in the preliminaries, he failed to do himself justice there and finished last of the eight runners.
At Leicester, the Frankel colt stepped up to seven furlongs and faced seven other runners in a novice event. The opposition looked strong; Newbury winner Mottrib headed the market for Roger Varian while the Godolphin newcomer Law of Peace had plenty of support. PJ McDonald took the ride on Fred.
Quickly away from the stalls, Fred made all the running in the middle of the course, tracked by Law of Peace and Leg It Lenny. Two lengths clear as the field passed the furlong marker, Fred was all out to hold the late challenge of Law of Peace. The official verdict was one of a nose, with Mottrib staying on for third beaten a further length and a half.
Fred is out of the Listed-placed Dubawi mare, Deirdre, who won over a mile as a juvenile. She is a winning half-sister to Duncan (by Dalakhani), who dead-heated with our own Jukebox Jury for the Group 1 Irish St Leger some years ago.
In stark contrast to the minimum margin of victory at Leicester was the ease with which One Hart scored at Hamilton some ten minutes later.
Like Fred, One Hart (pictured with Alan Mercer up) was having his second start at Hamilton, having been runner-up over course and distance eight days earlier. Middleham Park Racing’s Gutaifan colt faced five rivals, including Alwaatn Sound, a Shamardal newcomer from Kevin Ryan’s yard who is a half-brother to the Lowther Stakes winner, Queen Kindly. Franny Norton took the ride on One Hart.
Drawn on the stands’ rail, One Hart was quickly away and led from Navajo Dawn, with Alwaatn Sound tucked in behind them in third. Enterprisingly ridden by Seamus Cronin, Navajo Dawn kicked on into the lead, a lead which she held until inside the final quarter mile. At that stage, Franny asked One Hart to improve, and responding well, the colt bounded clear on the rising ground of the final furlong, going on to score by five lengths from Navajo Dawn, with Alwaatn Sound two lengths back in third.
From the first crop of the Dark Angel stallion, Gutaifan, who raced only at two, One Hart is out of the Cape Cross mare, Crystal Morning, who won a Tipperary Handicap over nine furlongs as a three-year-old. He was purchased for £50,000 on behalf of Middleham Park Racing at Goffs Premier Yearling Sale last August. Time will tell as to how far he will stay, but he certainly seemed to relish Hamilton’s stiff uphill finish.