An odds on favourite gets beaten and the internet trolls crawl out from under their piles of losing betting slips. The latest one calls himself Simon Street and comes, to me at least, from the highly unoriginal e mail address of ‘alwayscheatings@gmail.com’.

This evening’s offering read simply ‘Sofia’s Rock – Always cheating at it’s best Mark!’ (please note the grammatical error is his, not mine).

Interestingly, I have heard from him before. Most recently he e mailed me regarding my views on betting coverage on terrestrial television. Thankfully, he was one of the few that did not agree with me. He, like so many others, fails to see that he is one of the victims of the culture which leads punters to believe that finding winners is all about tips and inside information. I know it is difficult for most of us to conceive such ignorance but these people really believe that trainers know what is going to win the race and that beaten favourites are planned and are part of our conspiracy against punters.

His e mail address is clearly created as part of his attempt to remain anonymous but the name, Simon Street, may be real or, at least, one he uses regularly to send his abusive mail. A Simon Street recently bombarded jockey Sean Levey with abusive tweets from the twitter handle @SimonStreet9 after Promising was a beaten favourite at Newbury on August 13th. The same person tweeted that trainer John Butler was a ‘dirty cheat’ on August 19th. Presumably he backed the favourite when Butler’s horse won at Wolverhampton that day.

If the name is real, you may know him and, if so, I would urge you to expose him. I have had it suggested to me in the past that these people are to be pitied rather than exposed and that they require to remain anonymous due to their own vulnerability. It was suggested that, in exposing them, I was the bully but I don’t hold with that theory. I can cope with all the abusive mail I get, although I have to admit that it is an unpleasant side of the job, but I am very aware that such abusive e mail, tweets and texts can have very serious consequences and I think they should be stamped out wherever possible.

The Dikler, whoever he she or it is, is just like some other Racing Post scribes in liking to write about, but not listen to, what I have said. Did I deny that bands and music bring large numbers of people into racecourses? Of course I didn’t. Jess Glynne would probably fill Glasgow Green, never mind Newmarket and Market Rasen racecourses.

What I said was that the vast majority of those that go to racecourses to listen to music have no interest whatsoever in the racing and will not be introduced to racing by their visit to Newmarket or Market Rasen to listen to Jess Glynne. And I’ll add now that they are spoiling the racecourse experience for many of those that do go to racecourses to watch horseracing.
If courses are going to have these artists playing alongside racing then every effort should be made to engage the crowd in racing. Jess Glynne should not get the gig unless she is willing to participate in the day’s racing – presenting prizes, judging best turned out, doing interviews, etc. – and, if she won’t do it, find someone else or put the concert on when there is no racing.

The Dikler, apparently, is heading to Newmarket to see Little Mix. Well, he better remember to take his press badge as, last Friday, staff bringing horses for the last race, some with a horse in one hand, were denied access because they didn’t have their stable passes with them. The lady on the gate feared that they were trying to sneak in to see Jess Glynne without paying.

Our in-house photographer, Mikaelle Lebreton, passed me these shots taken at Catterick on Friday evening with her comment attached. I cannot but agree with her. 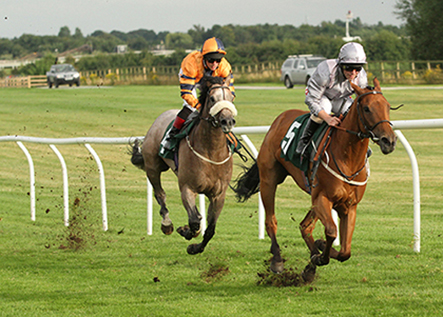 I didn’t look at the official going at the track, but on the Racing Post website, it says the ground at Catterick was “Good” on Friday. Looking at these shots, I am not sure that was quite the case! 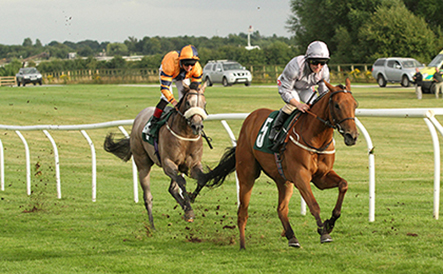 Letters and e mails of support for my views, as expressed on The Morning Line, continue to pour in. I realise that those sent to me may not be an entirely representative sample but it is gratifying nonetheless and clearly shows that I am not expressing such a minority view after all.

One e mail which arrived this morning was particularly interesting. It came from an Alexander Frew and he was prompted to write to me after reading my latest Bletherings.
Mr. Frew had already written to Channel 4 to complain about Graham Cunningham’s part in the show and Channel 4 had replied to him. Kelsey Quinn of Channel 4 Viewer Enquiries replied and said, “May we assure that Mark Johnston accepted the invitation to join The Morning Line and was fully aware of the panel and intended questions.”

Well, I can assure Kelsey Quinn and you that I had no knowledge of who would be on the panel until I arrived on set fifteen minutes after the show had started and saw them for myself. At no time was I given any prior notice of the questions that would be asked.

I have no complaint about that but I do think that, if they had plans to ask specific questions, sharing them with me in advance would have allowed an opportunity to make considered replies and make much better use of the limited time available.

The response to my appearance on the morning line has been quite astonishing. We have been flooded by e mails and letters of support for my views. A selection have been printed in this month’s Klarion but we do intend to put more of them on the website in due course.

To be fair, there were a couple – well, one and a half really – in support of Graham Cunningham’s position and I have to accept that people who agree with him might be less inclined to write to me but past experience suggests that critics aren’t slow to come forward so I have to conclude that there is widespread support for my views.

For me, it was a very unsatisfactory debate. I’m a big boy – too big by half – and I can cope with interruptions and attempts to mock but it is a serious subject and it would have been good to get into the detail.

Some say that I was ambushed. I don’t particularly feel that but clearly they had a preset agenda and prepared questions which I had no prior knowledge of. That was obviously going to put me at a disadvantage – I didn’t have any quips about string vests or dancing and sex at the ready – but I could still have answered his questions if given a chance to do so.
Surely we should really have started with a discussion on why, if the current programme content and the emphasis on betting is acceptable or preferable, as Graham Cunningham would have it, they have lost viewers, lost the contract and why most of them are fighting for a job. I shouldn’t need to tell them that something is wrong. And Graham Cunningham, if he is looking for a position in the ITV team, might be better trying to think of what he could do differently to attract more viewers rather than trying to defend the same old failing format.
Graham Cunningham asked me, ‘What would you do to engage 10 year old, 12 year old, children with a programme about horseracing? Just give me a couple of concrete ideas.’ And added, somewhat condescendingly I thought, ‘You’ve obviously thought about this’. I replied that I had thought about it but, in truth, I was unprepared for the question and didn’t think to query how he thought we could engage them with a programme about betting. Off air we discussed how all of us there had become interested in horseracing and most, if not all, had first become hooked in their pre-teen years. Of course it wasn’t betting that lured us in. I am surprised that the betting industry don’t seem to consider that or maybe they know it but would rather lure new customers into sports or betting opportunities that are cheaper and/or more profitable for them.

I could have gone on for hours on ideas to make coverage of racing more interesting to a wider audience, on how to simplify it, and on how to educate people about it. I built my business on an almost daily diet of new ideas. Most, of course, are rejected long before they are put into practice. Many are tried and fail, and it is very important to recognise that they are failing, but the regular supply of new ideas ensures that we don’t stand still. If I ran a television company covering horseracing, or a bookmaker, I’d have the same approach.